Detectives are appealing for information after a man armed with a gun attempted to rob a west London post office.

Police were called at 15:22hrs on Thursday, 25 June to reports of an attempted armed robbery at a post office on Jollys Lane in Hayes.

Thankfully no one was injured during the incident.

Officers attended and were told that the suspect had been loitering around the location of the post office from about 14:00hrs that day.

At about 15:00hrs, the suspect entered the premises and asked for stamp prices. He then returned to the post office about 20 minutes later and produced a suspected handgun, which he pointed at staff and demanded cash.

Suspecting it was an imitation firearm, staff bravely chased the suspect out of the premises and nothing was taken.

The suspect fled the scene - on a pedal cycle - behind the shops in the direction of Acer Avenue.

The suspect is described as a white male, aged in his late teens, about 5ft 10ins tall, with blond hair. He was wearing matching black tracksuit top and trousers with a pattern down the right lower leg and right sleeve. He had his hood up and was wearing a balaclava and gloves. He also had a dark green rucksack.

Detectives from the Flying Squad are leading the investigation and have released images of the suspect. They are appealing for anyone with information to come forward.

Detective Constable Andy Reason, the investigating officer, said: “Thankfully no one was injured during the incident, and nothing was taken, but this could have easily played out very differently.

“The suspect produced a suspected firearm during the incident and it is therefore vital that we apprehend him as soon as possible before he commits any further crimes. We are therefore calling on the public to assist us.

“If anyone has any information at all regarding this incident, no matter how insignificant you think it is, please contact us as a matter of urgency. Any information you provide will be treated in the strictest confidence. Alternatively, you can contact Crimestoppers anonymously.”

No arrests have been made. Enquiries are ongoing.

Anyone with information is asked to call police on 101 quoting CAD 5469/25JUN or Tweet @MetCC. 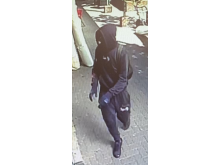