Detectives investigating a fatal stabbing in Hackney, have released footage of a man they would like to trace.


Zakaria Bukar Sharif Ali, 26, was found suffering from stab injuries after police were called to Kingsland Road, near the junction with Waterson Street, E2, at 06:29hrs on Saturday, 24 November.


He was taken to a central London hospital in a critical condition. He died from his injuries at 08:39hrs.


A post-mortem examination gave provisional cause of death as a stab wound to the abdomen.


Detective Inspector Rita Tierney, who is leading the investigation, said: "Zakaria was attacked following a night out. After leaving the Rolling Stock bar, he tried to intervene in an altercation taking place outside. He was attempting to calm the incident and was stabbed as a result.

"We are releasing CCTV footage of a man we would like to identify as we believe he may have been involved in the altercation.


"This happened in a busy and popular area of London. I know that there will be people who witnessed the incident or have information concerning the identity of the suspects. I urge those people to call the incident room without delay.”


As part of the investigation, an 18-year-old woman [A] was arrested on suspicion of assisting an offender. She has been bailed to return on a date in mid-December, pending further enquiries.


There have been no other arrests and enquiries continue.


Information can also be reported anonymously to Crimestoppers on 0800 555 111 or online at crimestoppers-uk.org. 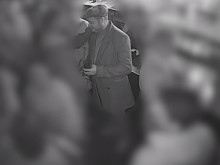