Detectives from the Met’s Flying Squad are appealing for help from the public following a smash and grab at a fashion boutique in Westminster.

Police were called to Celine in Mount Street, Mayfair, at around 02:00hrs on Wednesday, 30 October, after a silver S-Type Jaguar approached the premises and rammed the front door to gain access.

The occupants, four men, threatened two security workers with a knife and a shotgun before they went in and stole over £110,000 worth of designer goods before fleeing.

ANPR work has identified the vehicle travelling towards the scene from Finchley Road, while it was activated afterwards around 02:09hrs, travelling north towards St Johns Wood Road and Park Road.

Detectives are releasing an image of the suspect vehicle as part of their investigation. It was displaying the number plate AP57 AVO and will have sustained damage to the front of the vehicle.

Detective Constable Kevin Parley, of the Flying Squad, is investigating. He said: “This was an abhorrent crime that involved a group of men, armed with weapons, threatening serious violence to two unarmed security staff before stealing goods that they had no right at all to take. If you have any information about the vehicle in this image, no matter how insignificant it may seem, I urge you to contact us.

“Additionally, I am asking for anyone who works in the fashion industry who may have been offered a number of Celine designer goods for sale, but is unable to account properly for where they have come from, to also contact police.” 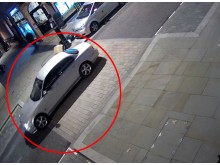