Detectives are appealing for information after an elderly man was robbed in Stoke Newington.

On Sunday, 12 July, the 81-year-old victim was withdrawing money from a cash point outside of Sainsbury’s on Green Lanes, near Clissold Park, N4, when he was approached by a woman.

She attempted to speak to him and then continued to follow him as he walked towards his home, despite him asking her to stay away.

Once the man had turned off the main road, the woman approached him again and grabbed at the man’s shoulder bag, pulling it towards her. The woman managed to get hold of the man’s wallet from his bag and, after a short tussle, she managed to take it from him. She then fled the scene on foot. The wallet contained bank cards and £50 in cash.

Officers are now releasing images of a woman they want to speak to in connection with the incident.

Detective Constable Mike Bradley, who is investigating, said: “The woman in this case has brazenly targeted an elderly man as he used a mobility frame to walk back to his home.

“He has been left shaken as a result of this incident and we are doing all we can to find the person responsible to ensure no-one else is subject to a similar crime.

“We would urge anyone who recognises the woman in this picture or who may have seen what happened that day to come forward and speak to us.”

Anyone with information should call 101 with Cad reference 4470/12Jul or alternatively can contact Crimestoppers anonymously on 0800 555 111. 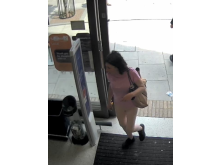