Officers discovered a cannabis factory and recovered a suspected firearm and two stolen vehicles during warrants in south London this morning.

The firearms warrants were executed at eight residential addresses in Croydon and Bromley on Thursday, 30 July.

Three men and two women, aged between 21 and 55 years old, were arrested on suspicion of offences including possession of a Class B drug (cannabis) with intent to supply, cultivation of cannabis, money laundering, theft of a motor vehicle and firearms offences.

Officers also recovered a stolen BMW and a motorbike.

Officers from the Croydon Safer Neighbourhoods teams executed the warrants with the assistance of the Specialist Firearms Command and the Territorial Support Group.

Superintendent Andy Brittain, from the South Area Basic Command Unit, said: “In the very early hours of this morning, Met officers carried out a number of warrants at residential properties in the Croydon and surrounding areas where we suspected firearms were being stored.

“Following searches of the properties, we have discovered a cannabis factory and arrested five people.

“Today’s warrants are a continued commitment to tackling shootings and violent crime in London that leave victims seriously injured or dead. No matter what the hour, Met officers are out on the streets making arrests and seizing weapons that are intent on causing serious harm to others.”

Supt Brittain added: “Not only have we taken a suspected dangerous weapon off the streets, we have also found a substantial cannabis factory, which I have no doubt will be a factor in violent crime in London.

“We have said, time-and-time again, that the supply and cultivation of drugs is intrinsically linked to the stabbings, shooting and other violence that intimidates our communities.”

Anyone with information on violent crime is asked to call police on 999 in an emergency.

Alternatively you can report crime anonymously via Crimestoppers on 0800 555 111. 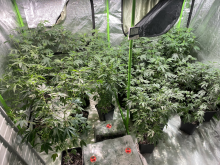