Detectives investigating an aggravated burglary in Camden are releasing images and video of the offence as they work to catch the perpetrators.

The victim, a 32-year-old woman, was at home with her young baby at her address, in the area around Abbey Road [officers are not specifying an exact road] at around 23:00hrs on Thursday, 19 September.

A black Audi drove onto the driveway of the address. Three suspects got out and forced their way inside as one man waited inside the car.

The victim, who had realised that something was happening, had already called the police.

The men came upstairs and demanded she tell them where the safe was, threatening her with a large knife.

The victim, traumatised, took off her wedding ring and a bangle and handed it over in a bid to get the men to leave.

Still the men demanded to know where the safe was. They then eventually fled, before the victim ran to her baby's room and waited for police to arrive.

Detectives have released images of the stolen items, as well as CCTV footage of the men as they forced their way inside.

Detective Constable Daryl Cavanagh, investigating, said: "This was a terrifying incident, made all the more callous by the fact that the victim was at home along with her young baby.

"All have their faces concealed and are wearing dark clothing, but it is hoped someone may recognise the vehicle, which has the VRM GU13FDV. It is unknown as to whether the vehicle was on false plates.

"If you have any information that could assist us, please call now." 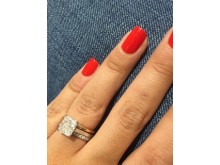 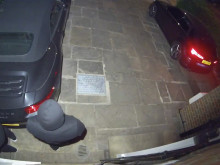 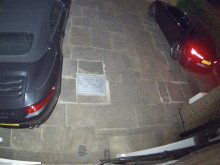 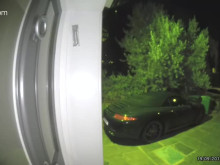