Detectives from Lambeth are appealing for witnesses and have released CCTV footage after a man was assaulted inside a bar on Clapham High Street in November 2017.

Police and London Ambulance Service (LAS) were called at 02:10hrs on Thursday, 23 November to reports of a serious assault at a bar on Clapham High Street, SW4.

The suspect approached the 27-year-old victim and accused him of harassing his [the suspect's] girlfriend. He pushed the victim and then struck him repeatedly on the head with a bottle.

Staff at the bar intervened and ejected the suspect from the venue.

The victim suffered head injuries that required medical treatment and caused scarring to his forehead.

The suspect is described as a white male, of a stocky or muscular build and balding blond hair. He was wearing a white shirt with green waistcoat, blue jeans and black shoes.

Detective Constable Christel Tchakounte, from Brixton's Crime Support Unit, said: "Due to the violent nature of this unprovoked attack it is important that we identify and locate the suspect as soon as possible."

CCTV still image of the m... 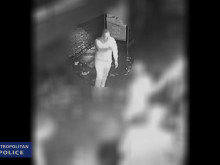 Moving footage of the man...