Detectives are renewing appeals for information following the rape of a woman in Acton.

They have also today released new CCTV footage of a man they need to identify and three possible witnesses who he passed whilst walking along Gunnersbury Lane, W3.

Police were called at approximately 21:25hrs on Saturday, 28 September to Langford Close, W3.

A woman, aged in her 20s, told police she had been approached from behind by a man who put his hand over her mouth to stop her screaming. He then forced her to an alleyway where he carried out the assault.

A member of the public heard what was happening and called police.

The man – who was described as skinny, and spoke with a London accent - ran off towards Uxbridge Road.

Prior to the attack, the woman had left Acton Town Station and walked along Avenue Road and then Langley Drive, at some point along this route police believe the suspect began to follow her.

She continues to be supported by specially trained officers.

Officers have conducted extensive CCTV enquiries in the local area.

The new footage captured a man, believed to be the suspect, walking in the direction of Acton Underground Station at 22:13hrs on the night of the attack.

It also shows three people who walked towards and then past the suspect and officers are keen to speak with these people.

Detectives would like to speak with anyone who was in the area at the time and who heard or saw anything suspicious.

A man was arrested close to the scene on suspicion of rape, but he has since been eliminated from the inquiry.

For information on personal safety, visit our advice page. 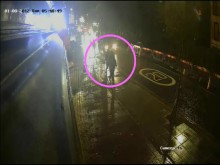