Police have released CCTV footage of a male they would like to speak to after a teenage girl reported she had been raped in Streatham.

The incident happened on Wednesday, 11 September at around 15:30hrs after the victim, a 15-year-old girl in her school uniform, had got off a bus on Streatham High Road.

As she turned into Guildersfield Road she was approached by a male who engaged her in conversation. They turned into Buckleigh Road where the male led the girl to an alleyway and then sexually assaulted her.

After the attack he walked back down Guildersfield Road towards Streatham High Road.

“We know there were people in Guildersfield Road and the surrounding area who would have seen this male walking with this girl. If you have yet to come forward to police with information, I would urge you to do so immediately.”

Anyone who recognises the male shown in the pictures or who has information that could assist the investigation is asked to contact police on 101 and quote CAD 5718/11Sept19 or tweet @MetCC. Alternatively, contact Crimestoppers anonymously on 0800 555 111. 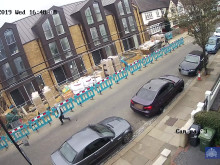