Police are appealing to the public for help in identifying two men being sought in connection with the theft of a Poppy Appeal collection tin at a hotel near Heathrow airport.

The first man approached the reception desk and asked the member of staff for some paper.

As the member of staff leaves the front desk for a short while, another man then approaches and takes the Poppy Appeal collection tin, which is on the reception desk.

Some time later, hotel staff noticed the collection tin was missing and after reviewing CCTV footage, reported the theft to police the following morning.

Detectives from the Met’s Aviation Policing Command are investigating and despite making various enquiries to try and identify the two men, they are now releasing CCTV footage of the men and asking for the public’s help in identifying them.

Detective Constable Kris Latham, from Aviation Police, who is investigating the case said: “I’d appeal to anyone who may know or recognise either of these men to get in touch with us.

“Stealing a Poppy Appeal charity tin, or indeed any charity donation, is a despicable act and we are determined to bring those responsible to justice.

“If you have any information, then call us on 101 or alternatively, call Crimestoppers, which is completely anonymous.” 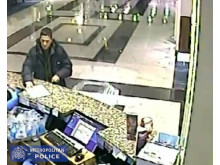