Children taking part in a south west London summer school welcomed Commissioner Cressida Dick to the camp as they marked the last day of this year’s event.

The Commissioner visited Parallel Youth Enterprise (PYE) Summer Camp, based at St Cecilia’s School in Wandsworth, on Thursday, 20 August to speak to the young people taking part and ask about their experiences over the last four weeks.

The camp is staffed by Met police officers, volunteers and PYE staff, and provides a four-week programme for children between nine and 16 years old who live, or go to school, in the boroughs of Wandsworth, Merton, Kingston or Richmond.

Due to Covid-19, places this year were limited to 70, broken down into ‘bubbles’ of ten children, each with their own staff.

As well as visiting them in their ‘homerooms’ to find out about their favourite activities over the summer, the Commissioner spoke to the whole group to tell them more about her work as a police officer.

The children then got the chance to ask her their own questions, which included how much training she had to do to become an officer and what she liked most about the job.

Commissioner Cressida Dick, said: “This year of all years the summer camp is extremely important. It gives 70 young people the chance to do some activities, to learn some new skills, to make some new friends and potentially to challenge some of their preconceptions about crime and policing.

“But the most important thing is to give them meaningful activity and things that will be useful for them and give them some sort of support and inspiration.

“It has been a really tough year for a lot of young people and to have them coming together in this way, safe, socially distanced and enjoying themselves and doing some quite challenging tasks, is really good for them.”

Chief Superintendent Sally Benatar, Commander of South West BCU, also visited the site to welcome the Commissioner, as well as judging posters that the children created as part of a session they had on knife crime.

Ch Supt Benatar, who retires from policing this week, said it was ‘very special’ to show the Commissioner around. “The Commissioner spent a lot of time with our young people and it was great not only for the children to see her but for our colleagues as well,” she said.

“I told the staff this morning how proud and grateful I am for everything they do. They have given up so much of their time, they are so dedicated and I can tell that the young people have built such good relationships with them.

“Over the last four weeks the children have had the opportunity to make new friends and meet the police in a completely different setting, all while having fun at the same time.”

Parallel Youth Enterprise (PYE), a not for profit organisation and charity, raise the funds for the camp and do the year-round preparation ready for it to be managed and run by youth engagement and schools officers from South West London.

It aims to give young people who would not necessarily have the chance to enjoy such activities the opportunity to do so, while also helping them to keep fit, active and be supported during the summer months.

This year’s trips included a day at a trampoline park, rock climbing and canoeing, as well as a whole host of other activities both off and on site.

PC Rachel Bright, a response officer who works as the programme organiser, led the Commissioner on her tour alongside project manager PC Louise Dann.

PC Bright, said: “As trustee of PYE, I am delighted the Commissioner gave up some of her time to come and find out more about what we have been up to.

“The young people had lots of questions for her and were keen to tell them everything they had been up to over the last four weeks.

“There’s no denying that the camp has been different this year but we are just so relieved that 70 young people from south west London got the chance to have four action-packed weeks, and we are already looking forward to next year.”

The Cmsr visited PYE Summer Camp, based at St Cecilia’s School in Wandsworth, on Thursday, 20 August 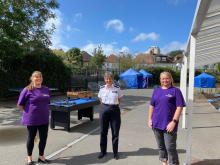 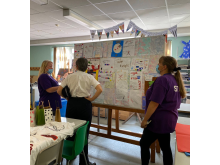