The Metropolitan Police Service is today announcing a £20,000 reward for anyone who can provide information leading to the identification and conviction of the person(s) responsible for the murder of 14-year-old Corey Junior Davis in Newham.

The announcement comes as his family grieve the anniversary of his death in September 2017.

Corey’s mother, Keisha, has also provided new images of herself and Corey together, including one of him as a young child, as she continues to appeal to anyone who may know something about her son’s killer to speak to police.

She said: “I have said repeatedly that community information is vital to catch Corey’s killers and take them off the streets. Someone around here knows who did this, someone could speak to the police and help catch those responsible, but for whatever reason, we have found a wall of silence which has so far been impenetrable. But I know that can change.

“Perhaps you are reading this right now and you know who killed my son. I want you to place yourself in my shoes. Imagine being at home and the police coming to your door to tell you your teenage son had been shot. Can you imagine the pain? How does a person deal with that?

“Corey died the following day in hospital, surrounded by his family as he took his last breath. His death was pain like I had never experienced before or since. He was only 14, just a child. He had his whole life ahead of him.

“Life will not ever be the same without my son. My heart will never mend. But if someone knows something and could just give the information police need to find his killers, you will allow us to find some small peace.”

Corey was shot at close range at around 15:08hrs on Monday, 4 September 2017 while socialising in a playground area in Moore Walk, E7. He died in hospital the following day.

His 17-year-old male friend also sustained potentially life-changing injuries to his leg. He was recently discharged from hospital and now faces a long rehabilitation process.

[A], a 20-year-old man was arrested on 6 June, 2018 and has since been released under investigation.

[B], a second male, also aged 20, was interviewed under caution on 20 June. He has not been arrested.

Detective Chief Inspector Dave Whellams, of the Homicide and Major Crime Command, is leading the investigation.

He said: “The announcement of this reward today, as his family mourn the anniversary of Corey’s death, will, I hope, encourage someone to come forward. Perhaps you are a person who would not normally speak to police, or perhaps you are fearful and think there might be repercussions. I want you to know that your information will be dealt with discreetly and sensitively. You will be ok. Please, think of what Corey’s mother Keisha has had to endure, and do the right thing and speak to us.”

“Corey was seen as being potentially vulnerable by older, hardened gang members who wished to draw him more fully into their world from the periphery of it.

"His mother was very aware of the risk and took steps to distance him from this environment, moving him from the local area and taking all the measures she could in an effort to protect Corey from that danger.

"She, like us, is desperately seeking the community's help to unlock the causes of these tragic events and bring those responsible to justice. My team have exhausted all avenues of inquiry so far in our investigation but we are nowhere near finished and remain absolutely committed to finding Corey’s killers.”

Today’s reward announcement is the latest in a series of appeals police have made as part of their investigation into Corey’s murder.
They remain keen to hear from anyone who may be able to provide information on a key vehicle sought as part of the investigation.

A still image of a metallic grey 2011 Range Rover Sport HSE TDV6 was captured at around 14:53hrs, just before the murder, on Wyatt Road near the junction with Upton Lane, E7. The windows are dark tinted from behind the driver's seat to the back of the vehicle.

Moving CCTV footage shows the vehicle shortly after the murder, fleeing the scene of the crime at around 15:15hrs and driving erratically on Romford Road in a northbound direction towards the A406 North Circular Road.

Detectives released details of the car - which they have established was stolen at around 01:00hrs on 24 August 2017 from Haverhill Road, Balham, in the hope of triggering the memories of members of the public who might have seen it in the intervening time or since the murder itself.

The first part of the registration plate displayed at the time of the shooting was D11, while the original index at the time it was stolen was EY11 XSG. Officers have also revealed details of the car's unique vehicle identification number (VIN) which acts as its 'fingerprint'. This is SALLSAAG3BA292779 (the last six digits are the chassis number) and its engine number is 0534374306DT.
The investigation team has not issued the full number plate that was on the car on the day of the murder as it was cloned from a legitimate Range Rover sport.

DCI Whellams added: "We have reason to believe this car could still be out there - someone could have bought it in good faith for instance having no idea that they have bought a stolen vehicle.

"I would be grateful if anyone who has bought an identical make and model of car since 4 September 2017 could check its VIN number. The VIN number can usually be found by looking from outside the vehicle at the lower left side of the windscreen, in the driver's side door jam or under the bonnet. Please contact us urgently if it matches the number we have given out. The engine number is also readily accessible to check.

"It is also possible that a garage or scrap dealer could have inadvertently worked on the whole vehicle or parts of it without realising it had been used in a murder. Again I would urge people in this sector to think back over the last month and check their records.”

DCI Whellams also wants to hear from anyone who has any more information on the car in the ten days after it was stolen - as well as on the day of the murder itself.

He said: "Did you notice any vehicles like this parked in a street near you in the last week of August 2017 that you weren't used to seeing, perhaps for a few days after 24 August 2017?

"Or did you see it in the Wyatt Road or Romford Road area around 3pm on 4 September 2017, the day of the murder?

"We have previously released moving footage showing the Range Rover speeding past a bus in Romford Road at around 3.15pm that day, only minutes after the shooting. If you were on that W19 bus, we would like to hear from you.

Those wishing to give information anonymously can contact Crimestoppers on 0800 555 111.

Corey with his mum, Keisha 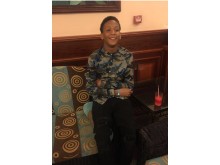