Detectives investigating a robbery in Poplar are appealing for the victims to come forward.

Police were alerted to the robbery by a witness who filmed the incident which took place at around 1800hrs on Sunday, 23 August on the canal path outside Yeoman Court, Tweed Walk, E14.

Two victims who were together, one male and one female, were approached by the suspects on the canal path.

A pedal cycle was stolen from one of the victims.

Officers have identified, arrested and charged two males, aged 17 [A] and 19 [B] with the robbery. They remain in custody.

Detective Constable Mike Bradley, investigating said: “Although we have charged two people, I am keen to hear from the victims in this case.

“If you are the victims, or you think you know who they might be, please do get in touch.

“It is important that we take an account from them for future proceedings and we also need to make sure that they receive any support or advice they may need.”

To remain anonymous call Crimestoppers on 0800 555 111 or visit crimestoppers_org.uk. 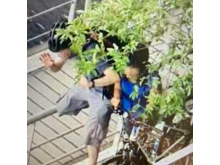 The robbery victims that ...

This is a still image of the victims taken from footage captured by a witness at the time of the robbery.