Detectives investigating the fatal stabbing of 18-year-old Ahmed Yasin-Ali in Westminster in July are appealing for information relating to a vehicle they believe to have been used in the murder.

Images of the Mazda 2 GT Sport have been released by officers.

During the murder, the car was being driven on cloned plates with a registration of LD17 CXS.

The images that have been released are of the same vehicle. The two images dated 10 July show the car displaying the cloned number plates, which had been given a parking ticket on Barrow Hill in St John’s Wood just five days before the murder.

The remaining image, time stamped 00:28hrs, was captured just before the murder took place on Elmfield Way on Wednesday, 15 July.

The car has not yet been recovered.

“I am appealing to anyone who is involved in the motor industry, for example, who has bought or sold such a vehicle recently to get in touch. It is critical that we trace this vehicle as soon as possible.

“Similarly, if any member of the public has recently bought or sold a Mazda GT Sport in this colour, I need to hear from you.

“This car was involved in the death of a young man whose life was taken in a tragic and unnecessary way. Finding this car will be key to our investigation and my team will leave no stone unturned in their efforts to find it.

“Have you seen a vehicle liked this parked in a car park or in a street? Regardless of its registration, please get in touch.

“Has anyone asked you to use their garage or lock up recently and, if so, was it used to store a car?

“No matter how unimportant you think your information might be, please don’t hesitate, what you know may in fact be a vital piece of information. Tell us what you know and leave the rest to us.”

+ A 23-year-old man [A] and a 17-year-old male [B] were arrested on suspicion of murder on Friday, 17 July. They have both been released on bail to a date in August.

A 20-year-old man [C] was arrested on Sunday, 26 July on suspicion of conspiracy to murder. He has been released on bail to a date in August.

A 25-year-old man [D] was arrested on suspicion of involvement in murder on Thursday, 30 July. He was released on bail to a date in August.

[D] a 25-year-old was arrested on suspicion of involvement in murder on Thursday, 30 July. He was released on bail to a date in August. 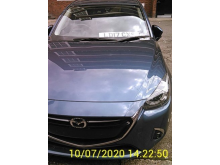 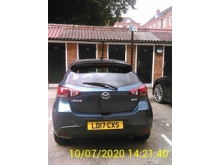 Mazda just before the murder