Detectives are urging people to be vigilant about who they let into their homes after receiving reports of burglars posing as a police officers to gain access to properties.

The safety advice is being given after recent incidents across London where a suspect has posed as a police officer so trick his way into homes.


Usually, the trickster would give a fake reason for needing to check their home and once inside would steal valuable items without the victim’s knowledge. The victim would only realise something was stolen after the burglar had left.

“We want to remind the public to be vigilant against distraction burglars, who often prey on the elderly and vulnerable.

“Distraction burglars pose as someone with fake ID, or a uniform, to gain your trust and access your home under a false pretence to steal.

“They could say they need to check your meters, fix plumbing leaks, or virtually any official reason to enter your home – including posing as a police officer.

“Utilise your spyhole or door chain where possible and always remember to ask for an ID badge or paperwork. If you are in doubt, call the official number for the company they say they are from – do not call a number they give you - or contact the police.

“If they say they are a police officer, ask to see their warrant card and ask for their name and warrant number. If you are still in doubt, call the police on 101 to clarify what they are telling you is the truth. Any genuine police officer would not mind you doing this, and would in fact encourage it.” 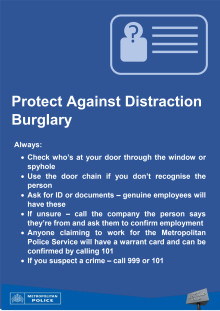