A drug dealer who was caught with half a kilogram of cocaine, thousands of pounds in cash and a knife, after police stopped the minicab he was travelling in, has been jailed.

Shihab Elamir, 24 (04.07.95), of Carlton Park Avenue, Merton, was sentenced to a total of six years and two months’ imprisonment at Kingston Crown Court on Thursday, 19 March.

Elamir was also handed a Criminal Behaviour Order to run for 14 years restricting him to possession of only one mobile phone which must be registered to him.

A deprivation order was made by the judge for the £4153.86 cash and an order was also made for the drugs and knife to be destroyed.

Elamir pleaded guilty to possession of an offensive weapon, possession with intent to supply class A drugs and possession of a class B drug (cannabis) at the same court on Friday, 13 March.

The court heard that on Thursday, 13 February at about 20:00hrs, as part of an intelligence-led operation, uniformed officers stopped a white Toyota Prius travelling north-west on the M40 between J8 and J9, Kingston. Elamir was a rear seat passenger in the vehicle.

A search of the vehicle led to the recovery of approximately half a kilogram of high purity cocaine, which was split into four identically wrapped blocks.

Two drug parcels were found in the rear nearside door pocket, another one in a jacket belonging to Elamir, and the fourth block was inside a ‘bum bag’ found in the boot of the vehicle. A small bag of cannabis was also found behind the passenger seat in the area that Elamir was seated.

The 'bum bag' also contained a spring operated lock knife and £553.86 in cash. Elamir’s jacket had another cash bundle inside totalling £3,600.

Within the vehicle, three mobile phones belonging to Elamir were recovered. The court heard that prior to being stopped by police, Elamir tried to discard them around the vehicle. One was found in the boot – as the vehicle had no parcel shelf - another was in the front passenger foot well and the third was found on a rear seat.

Elamir and the minicab driver were arrested for drug offences and possession of an offensive weapon and were conveyed to a west London police station.

As part of their enquiries, detectives executed a search warrant at an address related to Elamir in East Molesey and found several ounces of crack cocaine, heroin, electronic scales and a pestle and mortar believed to have been used in the production of class A drugs.

Elamir provided a no comment interview and was charged on Friday, 14 February. The driver was released under investigation pending further enquiries.

Detective Constable Stuart Hobkirk, the investigating officer from Specialist Crime, said: “The evidence we collected against Elamir was so overwhelming that he was left with no other option than to plead guilty.

“Dealing drugs, especially class A drugs, can have devastating consequences for vulnerable people and local communities. The Met is committed to taking illegal drugs off the streets of London and ensuring those who deal them are brought to justice." 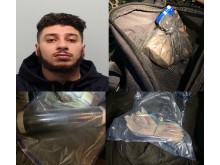 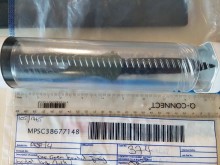 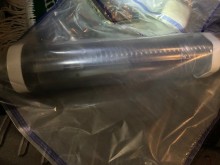 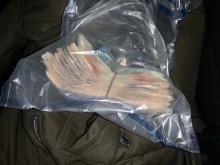