Detectives investigating the rape of a woman in 2005 continue in their efforts to identify and apprehend the suspect as they renew their appeal for information.

The rape occurred near Willesden Green library on Saturday, 9 August 2005.

Just before 21:00 that evening the victim, a Japanese student in her 20s, left Willesden Green tube station and was making her way home.

As she walked along Grange Road she was approached by an Asian male who touched her shoulder and spoke to her. Frightened by this, the victim ran off towards Chambers Lane.

Once in Chambers Lane the victim stopped running – as she looked behind her she saw that the man was chasing her.

He caught up with the victim, grabbed her and dragged her into the secluded front garden of an unoccupied address and raped her.

It is not known which direction the male ran off in after the attack.

The victim reported the attack at a local police station and was given immediate support by specialist officers.

The attacker is described as an Asian male in his early 20s. He is of slim build with short black hair. At the time of the attack he was clean shaven and had gelled hair. He was wearing a casual black shirt and black trousers.

Investigating officer, Detective Constable Anthony Stanton of North West Safeguarding team said: “We are renewing the appeal with a new e-fit of the attacker in the hope he can be identified.

“We believe that he may be called Ambi or Nagma and may have worked at a supermarket in Willesden at the time of the incident.

“After being attacked, the victim’s clothing was stained by red berry juice picked up at the scene. It is likely that the attackers clothing was similarly stained.

“We have the DNA profile of the attacker but this has not identified him. I appeal to anyone who has any further information or who believes they may know the identity of the attacker to contact me”

Anyone with any information that could assist the investigation should call DC Anthony Stanton on 07990 695946, call 101 asking for NW Safeguarding or tweet @MetCC. 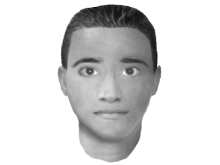