The family of Mohammed Shah Subhani have joined detectives investigating his disappearance and murder to make a new appeal to the public to come forward with information that could help the Met bring those responsible to justice.

His family spoke in public on Tuesday, 7 January for the first time since it was confirmed that human remains found in a wooded area adjacent to Hedgerley Lane, Beaconsfield, belonged to Shah. Specialist officers continue to search the large area as part of their extensive enquiries in the case.

During a visit to the site to lay flowers, pray and pay tribute to their beloved son, brother and partner, they urged members of the public to come forward if they had seen the key suspect vehicle - the black BMW X5 on cloned plates of YC67 MFY - or its two occupants when it was seen loitering in Hedgerley Lane in the days after Friday, 7 May last year.

The vehicle, which had been stolen overnight from Reading Road in Farnborough, Hampshire on Friday, 8 February, was later recovered by police on Tuesday, 3 August in Hounslow. They family also renewed their pleas for any other pieces of information that could prove beneficial to progressing the police investigation.

Quirat, his elder sister, said: "What happened to Shah, no one deserves - the only thing we look forward to in our lives now is justice for him. For this reason, we beg you all to go back and try remember if there was anything suspicious you saw around Hedgerley Lane or Hounslow around 7 May last year. Was there something that you thought looked odd? Did you hear something? Did you find yourself questioning some activities taking place?

"We appeal to the public to please come forward and help justice to be served. Shah didn’t deserve this. No one deserves this. It is now up to you all to help us unveil the faces of the monsters who did this and get them behind bars forever."

Paying tribute to her brother, she recalled the moment that the family was forced to hear the devastating confirmation that the human remains found did belong to Shah.

"When this heartbreaking news was delivered, we felt as if someone had pulled the ground beneath us and we had been swallowed whole. We had waited in hope and prayed that one day, against all odds, Shah will walk through the door and all this would be over. Never did we think Shah would be discovered seven months later, just 15 miles away from home.

"It is beyond our imagination that something so horrific happened to our loving Shah. These monsters maliciously killed our brother mercilessly and disregarded his body in an isolated woodland. We couldn’t even have fathomed this in our worst nightmares. Not only was Shah robbed of life, but also robbed of a rightful burial.

"Shah was a loving and caring young man who had his whole life ahead of him. He always aspired to do well in life and made sure his friends and family around him felt loved. His four-month-old baby girl didn’t even get a chance to experience all the love her Dad had to give her, he was such an amazing son, brother and uncle, you can only imagine how much of an amazing Dad he would have been. Our hearts are broken, this pain will never go away."

Detective Chief Inspector Noel McHugh, from Specialist Crime, who is leading the investigation, said: “When I met with Shah’s family and broke this awful news to them, it was something that I hoped I would never have to do. It is incredibly brave of them to decide to speak publically today, just a few days after what would have been Shah's birthday [Jan 5].

"I believe that Shah’s discovery is something that his killer(s) were confident would never happen. However, whilst this was the worst possible news for his loved ones, I believe it presents potential opportunities for our ongoing investigation.

“I think that this area is only familiar to a small group of people. It is fairly isolated and you would probably have to know it existed, as opposed to it being stumbled across. It is not visible to a passing motorist. As I mentioned previously, the wooded area had evidence of spent shotgun cartridges, these are not connected to Shah’s death, but I am keen to speak to people who use this area for such recreational activities, particularly if they were here in early May last year.

DCI McHugh continued: "A car parked up here would possibly appear out of the norm to locals who know the area. As already highlighted, the stolen black BMW on cloned registration plates YC67 MFY was seen on Hedgerley Lane in the days following 7 May, when Shah was reported missing. This vehicle had two occupants and appeared to be loitering in the area. This car was subsequently recovered in Hounslow. We are very keen to understand who was using this vehicle particularly on 7 May and the following weeks.

“Please try and recall if you saw anything you felt was suspicious at this time, whether the BMW, or any other vehicle or people, or anything else that seemed out of place. Last time we appealed to the public we received information on an additional sighting of this car, so every call really is of the utmost importance to us. Do not discount anything as being too insignificant to tell us about - it could prove to be a significant piece of the jigsaw in establishing what happened to Shah."

DCI McHugh explained: “We have a substantial amount of land left to search and it is very challenging terrain, making it a complex and painstaking undertaking, but we continue to make progress - and have had a significant new find just today [Tuesday 7 January]. We are likely to be here for several more weeks while we complete this important task. I am very grateful to the local community who have been so understanding and supportive of the police operation. I do apologise for the inconvenience that you are experiencing, as we continue to strive to keep disruption to a minimum."

Police know that on the day he disappeared, Tuesday, 7 May, Shah travelled to Acton police station, arriving at approximately 13:45hrs. It is possible that certain people may have had the impression that he would have had £3,800 returned to him during this visit; but this did not happen. It is believed that he may though have had a set of number plates restored to him, along with two mobile phones.

Shah travelled from the Acton area at 15:00hrs on a journey to Hounslow. Shah’s Audi Q3, registration LC67 CXS, was captured on CCTV travelling south on Hanworth Road, towards Whitton Road, in Hounslow at around 15:17hrs.

Shah was due to collect £5,000 at a business premises on Derby Road in Hounslow. His white Audi Q3, arrived at 15:19hrs; police believe that Shah was driving. His car left at 15:47hrs, but it is not believed that Shah was driving the car at that time. He was not seen to leave the premises.

The Q3 entered Park Road and was subsequently moved to Camden on false registration plates. DCI McHugh previously confirmed that his team had ruled out the possibility that Shah was in his own car at the time it was shot at - the vehicle was recovered with ballistic damage on Wednesday, 19 June in Camden.

One of the other suspicious vehicles officers also still need information about is a blue Range Rover Evoque, using false plates MF13 AOT, which was at the corner of Derby Road at around 15:20hs on Tuesday, 7 May, at the same time as Shah was there. Officers know the car later travelled to Ilford on those plates, but has not been seen since. It had a lot of body damage and might have been passed on.

DCI McHugh concluded: "I am in no doubt that there are people out there with information who have still not come forward. There is possibly a misguided loyalty to those responsible for Shah’s murder or you may be frightened of those involved; please be reassured that we will deal with your information sensitively in complete confidence.

"To anyone in the know, just imagine the pain your continuing silence is causing Shah’s family. Please reach out to us if you can help, either via 101 or anonymously via Crimestoppers. A substantial reward of £20,000 remains on offer for information that leads to the arrest and conviction of those involved."

Anyone with any information about Shah’s disappearance is asked to conctact police on 101, or via Twitter @MetCC. Please quote Operation Rockton. To give information anonymously contact Crimestoppers on 0800 555 111 or online.

Detectives have made a number of arrests in connection with their investigation:

A 23-year-old-man [A] was arrested on Tuesday, 2 July on suspicion of perverting the course of justice, he has been released under investigation.

Two men – aged 22 [B] and 25 [C] – were arrested on Monday, 8 July on suspicion of murder, kidnap/abduction and perverting the course of justice. [B] remains on bail, while [C] was released under investigation.

A 20-year-old man [D] was arrested on suspicion of conspiracy to commit murder, kidnap and perverting the course of justice on Wednesday, 31 July. He was subsequently released under investigation.

A 19-year-old man [E] was arrested on Thursday, 29 August on suspicion of conspiracy to commit murder and kidnap. He was released under investigation.

A 22-year-old man [G] was arrested on suspicion of murder on Monday, 9 December. He has been bailed to return to a police station at a later date.

A 67-year-old woman [H] who was arrested at Heathrow Airport on Tuesday, 17 December on suspicion of perverting the course of justice, assisting an offender and making a false statement has been bailed to return to a police station at a later date. 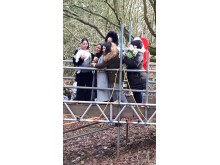