Detectives investigating a suspected attempted kidnap incident in Bexley have released an image of a man they are working to trace in connection with the incident.

She was approached from behind without warning by a man unknown to her, who then grabbed hold of her.

The victim screamed and the suspect made off on foot towards the Broadway, Bexleyheath.

As part of their investigation, detectives from the South East Command Unit have released an image of a man they would like to speak to.

The suspect is a described as a white male, wearing black bottoms, a beige jumper, with a face mask pulled down to his chin.

Detective Constable Tristan Hunter, investigating, said: “Though the victim was not physically injured, she was left incredibly shaken by this frightening incident.

“I urge anyone who may recognise this man to contact us immediately.”

Anyone with information that could assist police is asked to call 101 ref CAD 9818/25JUN20. 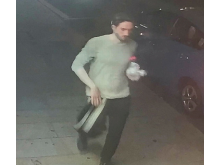 Image of man police would...