The wife of the police officer seriously injured in a collision in Woodford Green has made an appeal for information.

Donna Casey, wife of Police Constable Jon Casey, has posted a picture of her husband's injuries on social media in a bid to get witnesses to come forward following the collision in the early hours of Monday, 6 January.

Officers indicated for a grey Mini Cooper to stop in Chigwell Hill, near Saint Barnabus Road, E18 at about 00.10hrs. It failed to do so and a pursuit was authorised.

Officers positioned themselves on Chigwell Road, IG8, near Gaynes Hill Road and the M11 overpass, in wait of the vehicle.

As the vehicle approached, one officer attempted to deploy a Stop Stick (stinger) when he was struck by the car. The vehicle then sped away from the scene.

The London Ambulance Service attended and the officer, PC Jon Casey was taken to hospital where he remains in a serious but stable condition. His injuries are not life-threatening.

He is being supported by specialist officers.

Fast-paced enquiries took place to locate the suspect vehicle and it was located a short time later at about 00:45hrs abandoned in Woolhampton Way, Chigwell.

The vehicle was on false ‘67’ year plates.

A 29-year-old man and a 24-year-old man have been arrested on suspicion of assisting an offender. They have both been released under investigation.

Enquiries continue to trace the driver.

The investigation is being led by detectives from the Met’s Serious Collision Investigation Unit.

Detectives have released an image of the suspect vehicle and are appealing for information of its movements before and after the incident.

Detective Sergeant Jose-Paulo Qureshi said: “The officer was simply doing his duty when he was struck by the vehicle and was seriously injured – he’s lucky not to have been killed.

“The suspects fled the scene, despite knowing they had hit an officer, leaving him seriously injured in the road. We are working around the clock to find the people responsible. I would appeal to those who were involved to do the right thing and hand yourself in.

“I’d also appeal to members of the public to help us with our investigation. Did you see a grey Mini Cooper on ‘67’ plates driving erratically or at speed in the Woodford Green or Chigwell areas between midnight and 00:45hrs on Monday, 6 January? If you have any information about this vehicle, or dash cam footage, please get in touch with us as a matter of urgency.”

Appeal after officer hit by car in Chigwell

​Detectives are appealing for information after an officer was hit and seriously injured by a car that failed to stop in Woodford Green. 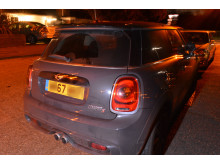 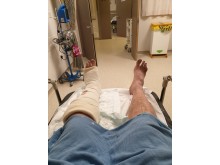