A man has been jailed for the attempted murder of a woman he stabbed in Streatham Hill.

Mark Brazant, 43 (19.05.76) of Windmill Road, Ealing appeared at the Old Bailey on Thursday, 6 August where he pleaded guilty to attempted murder following a trial. He had already pleaded guilty to one count of possession of an offensive weapon, and three counts of pointed/bladed articles at the beginning of the trial.

He was sentenced on Wednesday, 16 September to life with a minimum term of 11 years. He will initially serve his sentence in a secure hospital; if and when it is deemed appropriate, he will be moved to serve the remainder of the term in prison.

Police were called at 17:23hrs on Monday, 30 December 2019, to a report of a woman stabbed in Downton Avenue, Streatham Hill.

The victim was taken to hospital. Her injuries were assessed as not life-threatening or life-changing. The stabbing occurred as she was pushing her child in a pushchair. The child was not injured.

Brazant attacked the victim from behind then he ran off down Downton Avenue away from the High Road leaving her injured in the street.

During the trial the jury heard how in-depth CCTV enquiries enabled detectives to trace Brazant’s movements that day. He had travelled all over London for hours on public transport in search of a victim.

Brazant was arrested and charged with attempted murder, possession of an offensive weapon and possession of a pointed/bladed article on Thursday, 2 January.

Judge Anglela Rafferty QC remarked on how couragous the victim was during both the attack, and her appearance at court during trial.

Acting Detective Sergeant Mark Pascall, said: “I echo the judge's comments and commend the victim for her bravery throughout the trial and courage to give evidence in front of the man who caused her serious harm

"Brazant originally claimed he wasn’t in sound mind at the time but his words and actions following the attack showed otherwise. It was clear Brazant had a clear intent that day to cause harm. He is dangerous and unpredictable.

“We have no idea why he chose the victim he did but thankfully, and luckily, she wasn’t more seriously injured.

“I would like to thank the investigation team for extremely thorough enquiries that meant we were able to charge him so quickly and take him off the streets on London. 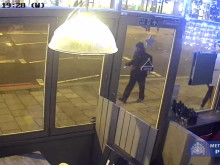 CCTV of Brazant prior to ...

A man has admitted the attempted murder of a woman he stabbed in Streatham Hill.