A man has been convicted of manslaughter following the death of Zahir Visiter in St John’s Wood.

Kamal Hussain, 22 (06.05.97) of Sutherland Avenue, Maida Vale was found guilty of manslaughter following a trial at the Old Bailey on Friday, 25 October.

He will be sentenced at the same court on Friday, 15 November.

The court heard how 25-year-old Zahir was stabbed to death on Cunningham Place, NW8 at around 18:15hrs on Thursday, 28 March.

Zahir had left his home a few minutes earlier and told his family he was going to a meeting near his flat in order to hand over some money; he left the flat with about £280 in cash.

A matter of minutes later Zahir had been stabbed four times, one wound was to his back and another on his arm, thought to have been made when Zahir was trying to defend himself. However the other two wounds were to his chest and both caused fatal injuries.

Zahir was first seen injured by members of the public who saw him lying in Cunningham Place.

A blood trail indicated he had been able to travel a short distance from near his home, before he collapsed.

Members of the public, including an off-duty paramedic and GP, tended to him at the scene.

However, Zahir’s injuries were not survivable and he was pronounced dead at 19:19hrs at St Mary’s Hospital.

A post-mortem examination confirmed that the two stab wounds to the upper chest were the fatal injuries, both entered the right lung and one had pierced the aorta. These wounds would both have caused massive blood loss leading to death.

It was also noted by the pathologist that all the wounds had been delivered with considerable force.

A search of Zahir’s clothing showed that the money he had taken to the meeting was now missing.

CCTV enquiries located Hussain at 18:08hrs travelling on a rented bicycle in the general direction of Zahir’s address. He can then be seen travelling past the road where Zahir was waiting for his meeting, before immediately returning to Zahir’s location by a different route just over a minute later.

Minutes later Zahir emerged onto Cunningham Place having been stabbed four times and then collapsed.

He was closely followed by Hussain who looked towards him as he was injured with his hood over his head. One witness told the court Hussain put on a balaclava to disguise his appearance and that although he moved away, continued to watch as others came to Zahir’s aid.

He then walked away, following a pathway running alongside the Regent’s Canal to Lisson Grove.

A knife was subsequently found in this stretch of the canal and at an adjacent position on the towpath, police recovered an abandoned balaclava.

As a result of information, Hussain’s details were circulated and plain clothes officers on patrol spotted someone matching his description crossing the canal near the Lisson Green Estate.

He fled from officers, running to the Central Mosque which he entered via the underground car park. He then made his way to a washroom where he discarded his outer clothing. A pair of trousers left behind at the mosque were found to have a trace of Hussain’s DNA.

Shortly after midnight on Wednesday, 3 April, Hussain was arrested and taken to a north London police station where he declined to answer questions but provided a prepared statement denying responsibility for the killing.

Detective Sergeant Gary Royal, said: “What exactly led to this brutal stabbing may never be known for sure. It appears that money that Zahir had with him was missing, but whether his death was motivated by robbery or some other cause may never be known. What can be said is that this appears to have been a planned and brutal attack and the wounds to Zahir were found to have been delivered with considerable force.

"I hope that today’s verdicts bring some closure to Zahir’s family who have been deeply traumatised by his loss."

An 18-year-old man [C] arrested on suspicion of assisting an offender was released under investigation. 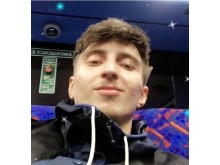