A man who struck and killed a pedestrian while driving at speeds of around 90mph has been jailed.

He had pleaded guilty at an earlier hearing to causing death by dangerous driving and failing to stop at the scene of a collision. As well as being jailed, Blackwood Jones will be disqualified from driving for ten years on his release.

In the early hours of Saturday, 12 January a blue VW Golf being driven by Blackwood Jones collided with 24-year-old Celia Ines Betrouni as she crossed the road in Brixton Hill, at the junction of New Park Road.

Officers, London Ambulance Service and London’s Air Ambulance all attended but Celia, a French national, died at the scene from her injuries.

Blackwood Jones failed to stop following the collision and abandoned his car in nearby Harriet Tubman Close, SW2.

After a media appeal was circulated asking for the public’s assistance to locate him, Blackwood Jones attended a police station on Monday, 14 January and was arrested.

“Blackwood Jones was driving at around 90mph in a 30mph zone – his excessive speed meant there was only one outcome when he struck Celia.

“His actions have utterly shattered Celia’s family who will have to deal with their loss for the rest of their lives.

“Blackwood Jones will now spend a significant period of time in prison. His reckless actions offer a clear indication of the devastating impact driving at excessive speed can have.” 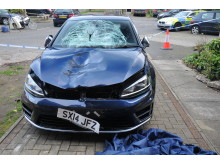 The car following the col... 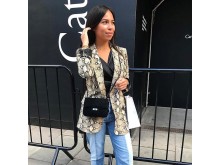 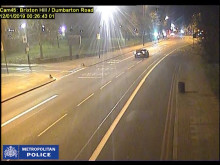