A man has been sentenced to seven and a half years in jail after he pleaded guilty to causing the death of a three-year-old boy who was crushed to death by a car seat.

Stephen Waterson, 26, (01.05.93) of Adams Way, Croydon, was sentenced at the Old Bailey on Thursday, 14 November after he pleaded guilty to manslaughter by gross negligence on 2 September.

Waterson had also previously pleaded guilty to conspiracy to pervert the course of justice and was found guilty of intimidating a witness after a trial earlier this year.

He was jailed for five years and six months for manslaughter. He was also sentenced to two years for intimidating a witness and 18 months for perverting the course of justice, to run concurrently with each other, but consecutively to the manslaughter.

Three-year-old Alfie Lamb suffered fatal injuries after he was crushed by a car seat on 1 February 2018.

The toddler had been travelling in an Audi convertible vehicle with four adults: his mother, Stephen Waterson, Emilie Williams and another man.

Alfie had been placed in the footwell of the car, between his mother’s legs and behind Waterson’s seat on the passenger side.

The court heard Waterson moved the seat back because he wanted more space in the front. The movement of the seat, via electrical operation, would have cause up to 81kg of pressure on Alfie.

The paramedics who treated Alfie identified burst blood vessels around his eyes, which were an indication of suffocation. The pathologist who examined Alfie found he had died as a result of crush asphyxia.

CCTV footage obtained by police showed the toddler had been fit and healthy when he got into the vehicle in Sutton High Street.

When paramedics first arrived at Adams Way, Croydon, to treat Alfie, his mother and Williams told them they had been in a taxi when he had become unresponsive. They repeated this false account to police officers who attended the scene.

Analysis of Waterson's and Alfie’s mother’s mobile phones showed they remained in contact throughout the time Alfie was in hospital.

Williams, who was in the police car with Alfie’s mother, said she kept the phone line open to Waterson so he knew what the officers were saying.

A text was sent to Waterson shortly after Alfie’s mother arrived at hospital which read: "They (police) know we are lying."

When he arrived at the hospital, Waterson gave police a false name and repeated the false account given by Williams and Alfie’s mother.

Police managed to recover the Audi on 16 February and subjected it to detailed forensic analysis.

Detectives investigating Alfie's death also established that Waterson had taken part in an assault on the man driving the Audi on 18 February 2018 in an attempt to stop him talking about what had happened on 1 February 2018.

Waterson was arrested on 28 February 2018 at his home address in Adams Way.

He gave a prepared statement when interviewed, in which he said that he loved children, and would not deliberately harm a child.

Waterson was charged by postal requisition on 30 May 2018 with perverting the course of justice. He was further charged with manslaughter on 5 June 2018 and witness intimidation at a later court appearance.

“Stephen Waterson has consistently attempted to avoid responsibility for causing Alfie’s death. Rather than admitting what he had done, he chose to put Alfie’s family through the trauma of a trial at the Old Bailey when they were forced to relive the distressing details of how the toddler died.

“Waterson eventually pleaded guilty on day one of his retrial. I hope the lengthy prison sentence handed to Waterson today gives Alfie’s family some justice at last.

“I would also like to praise my team of detectives who systematically unravelled Waterson’s initial account of what had happened and ensured he had no option but to admit what he had done.”

In a statement, Alfie's family said:

“As a family, we are utterly devastated about the death of Alfie. He was a very happy three-year-old boy with his whole life ahead of him.

“The tragic circumstances surrounding his death are something we will never come to terms with. For the last 19 months, we have experienced a very traumatic police investigation and court trial with members of the family giving evidence to help secure the prosecution and fight for justice.

“No sentence will ever be enough but today we finally gave Alfie a voice and justice has prevailed.

“We welcome the court result and sentence and take comfort that the person who killed Alfie has been held responsible.

“We hope we can move forward in private with our treasured memories of Alfie.” 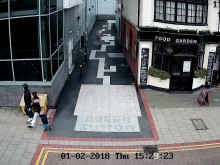