The Metropolitan Police Service has become the first British police force to develop its own mobile fingerprint device in a move that will save both officer time and public money.

The mobile biometric device, named INK Biometrics (Identity Not Known), scans suspects’ fingerprints and will confirm their identity within 60 seconds if they are known to police databases. This allows faster apprehension of wanted offenders and by removing the need to return to base will keep officers out on the streets for longer.

Although similar technology has been used by the Met and other forces since 2012, the new kit is cheaper which allows six times as many devices to be deployed - 600 devices will now be rolled out to frontline officers across London in the next six months.

Fingerprints are only taken where there is legal cause under the Police and Criminal Evidence Act but by giving more officers access to this technology it will reduce the need for suspects to be taken to police stations to have their identity checked. This will also free up limited custody space for offenders who do require detention.

The portable device comprises of software produced by Met staff, used on an Android smartphone handset and paired with a Crossmatch fingerprint reader. The device securely communicates with the Home Office developed Biometric Services Gateway (BSG), which searches the Criminal Records Office and immigration enforcement databases.

If a suspect has a criminal record or is known to immigration enforcement their identity can be confirmed at the roadside and an officer, with relevant access levels, can also use the device to check the Police National Computer to establish if they are currently wanted for any outstanding offences. All fingerprints taken on the device are deleted automatically once the officer logs off the device.

Met officers and staff took the innovative step of developing their own product and software when it became clear that doing so could significantly increase the number of devices (fewer than 100 in recent years) at a much reduced cost. INK will save an estimated £200,000 in support costs per annum.

Commissioner Cressida Dick, said: “I have always been clear in my ambition to make the best possible use of technology to fight crime. The speed of analysis of information that this device will offer, will drive effectiveness and efficiency and allow officers to spend more time in our communities and fighting crime.

“This new technology was developed from the ground up with the full involvement of our officers and as we move forward we need more people like them, to join us with their tech savvy, innovative thinking. I hope this shows potential officer recruits that policing is fully embracing the digital age and that they can be part of an exciting future.”

Superintendent Adrian Hutchinson, leading the project, said: “Mobile identification technology helps officers to do their jobs efficiently and effectively. For example, if police stop a driver for a traffic violation but the driver has no documents on him and the car is registered to another person officers may not be happy that the name given is correct. INK can allow them to confirm the identity to allow the service of a summons, rather than arrest them and take them to a police station where they then confirm their identity. Also, if the person is wanted for other offences, this device will allow us to establish this at the point they are stopped.

“I am very proud we have become the first British police force to develop our own device. With the money we are saving, we are now able to provide more devices to more officers than ever before, saving them the time and inconvenience of either waiting for a biometric device to arrive or taking the suspect into custody."

The in-house system has been built and tested by the Met’s Digital Policing division and the Transformation Directorate. The devices are designed to be simple to use and rechargeable in a police vehicle.

Be a part of an exciting new wave of technology that will help us to fight crime in our communities - the Met is recruiting police officers now, visit: www.met.police.uk/car/careers/met/police-officer-roles/ to find out how you could start your career in policing.

Police were called at approximately 2150 hours on Thursday, 26 July to a report of a naked man running in the road, jumping on vehicles while self-harming with a razor blade outside Bayswater underground station on Queensway W9.

The man aged 36 had no ID or personal belongings and gave the officers incorrect details. He was taken to the hospital where officers’ fingerprinted the man using the INK device. In spite of having slightly cut index fingers on both hands from self-harming, the device successfully and quickly, provided his details.

The data that came back from the fingerprint scans included a photograph and descriptions of his tattoos that helped officers to identify the man.

It became apparent that he was under a mental health order and had absconded from a mental health facility. The swift information provided by the device further highlighted additional health concerns that were very useful for the officers and staff at the hospital, who were treating him. The man was eventually returned to the facility.

PC Jon Marshall, a Response Team officer from Westminster borough said, “The fingerprint scan was successful in coming up with both an immigration response and a Police National Computer identification. The man had a common name and without the fingerprint reading it would have been extremely difficult to have identified him and to treat him in a way that was suitable to his needs and that ensured the safety of officers and hospital staff. The immigration data also had a photo attached, which I was both surprised and impressed by.”

Police had reason to stop a dark VW Golf at approximately 1345 hrs on Tuesday, 31 July on Brixton Road in Lambeth.

Initially the two occupants gave false identification details, so officers used the INK fingerprint device at the scene. This swiftly returned positive identifications for both as wanted and due to the information received, resulted in the two males being arrested.

The first suspect, aged 25, was arrested for possession of an offensive weapon, burglary, going equipped to steal, handling stolen good and possession with intent to supply drugs.

The second suspect aged, 23 was arrested for possession of an offensive weapon, going equipped to steal and burglary.

In addition, a lock knife was found in the vehicle along with a balaclava and stolen moped keys. While in custody, a further search carried out by the officers found a watch valued at £3000 concealed in the first suspect’s underwear.

Police Sergeant Chris Snell from the Violent Crime Task Force said: “The INK device was able to give officers an accurate and rapid result helping them to process these individuals more efficiently, so that they could be back on the streets helping to protect London and removing potentially, violent criminals more quickly.”

The two suspects have since been released under investigation pending the analysis of the drugs. 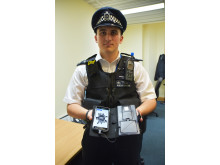