Latest figures show the Metropolitan Police Service (MPS) is seizing more assets from criminals than ever before with a record total of £94 million reclaimed in the past financial year.

The total value of cash seizures, confiscations and assets seized under the Proceeds of Crime Act (POCA) and the Misuse of Drugs Act (MDA) has increased by more than 40 per cent from £67 million in 2016/17.

Confiscation orders are made after a court conviction to deprive criminals of the benefits of their crimes.
In January, one of the biggest confiscation orders in the Met’s history was handed out to the men responsible for the theft of gold and jewellery from a vault in Hatton Garden.

The four men responsible for the theft were ordered to pay back more than £6 million or each face another seven years in jail.

The Met has also increased the amount of money claimed from ‘restraint’ of criminal assets and forfeiture orders, which are made at court, from £10.8 million in 2016/17 to 12.6 million in the past financial year.

The MPS has been a leading contributor to the creation of the Criminal Finance Act 2017 over the past two years.
It is hoped the act will lead to more criminal assets being seized as the new powers include Account Freezing Orders (AFO), which will allow an officer who has reasonable grounds to suspect that money held in a bank account comes from crime, or is intended for future unlawful conduct, to apply to a magistrate’s court for the account to be frozen.

These funds could then be seized via the current cash seizure and forfeiture route. Banks will also be able to submit Defence against Money Laundering (DAML) reports, which will create further opportunities to seize criminal wealth, recover victim’s monies and disrupt crime.

The new act also includes Unexplained Wealth Orders (UWO), which will allow the CPS, on behalf officers, to apply to the High Court to freeze property and funds which total more than £100,000, providing there are reasonable grounds that the subject, or a person connected to the subject, is involved in serious crime.

The court may issue an interim freezing order relating to all property held pending the outcome of a civil recovery investigation, to show on the balance of probabilities the assets have come from crime.

Detective Superintendent Nick Stevens, head of the Met’s Criminal Finance team, said: “The record seizures in the past year are a result of officers from across the Met placing financial investigation at the heart of every operation. The asset seizures are making a significant impact on criminality at all levels, from those engaged in gang and violent crime right through to high end organised criminal networks.

“The Met has played a key role in the introduction and implementation of the Criminal Finance Act and, the new powers, together with the continued successful MPS financial crime strategy, will see the value and impact of financial work increasing over the next few years.

“We want to make sure that crime doesn’t pay and will use all legislation available to us to recover money and assets obtained by criminals.”

Funds forfeited and confiscated by the MPS are paid to the Home Office, although the MPS receives a percentage back from the Home Office through the Asset Recovery Incentivisation Scheme (ARIS).

The MPS uses monies received from the ARIS income to:
- Fund and support financial investigation posts within the MPS Business Groups;
- Fund and support financial investigation training across the MPS;
- Operate and fund a number of different internal schemes to drive performance including the POCA Funding Scheme, used to support and encourage Borough proactive policing in relation to acquisitive crime, to generate further POCA opportunities, assist boroughs and Specialist Units in targeting organised criminal groups, gangs and violence.

One of the biggest recent cash seizures was £240,000 fund in two bags on February 21 in North End Road in Fulham. At approximately 13:40hrs, police noticed a male, Alexander Guevara Mejia, who was walking along the road pulling along what appeared to be an empty suitcase and carrying a rucksack on his shoulder. He was seen to go into a communal area located between two business premises. Minutes later, he was seen again, however this time the suitcase appeared full as well as the rucksack. He was stopped by police and £200,000 worth of cash was found in the suitcase and £40,000 in the rucksack. He was arrested on suspicion of money laundering offences. Guevara-Mejia, 40 (27.3.78) of Tottenham Lane, London, pleaded guilty to a charge of transferring criminal property and, on March 22, was sentenced to two-and-a-half years in prison.

A man currently serving a jail sentence for offering to sell parts of endangered species has been ordered to pay back £100,642 in the next six months or face another three-year jail sentence.
Allawi Abbas, 53, (02/02/1965) of Gisburne Way, Hertfordshire, was sentenced to 14 months in jail in November for keeping/offering for sale rhinoceros horns, elephant tusks and hippopotamus teeth.
A financial investigation under POCA pursued by the Met's Criminal Finance Team resulted in a criminal benefit agreed at £961,777 and his available assets were agreed to be £100,642. Any other major funds / valuables / property up to the benefit amount that he accumulates during his lifetime will be removed from him as and when they come to police notice. 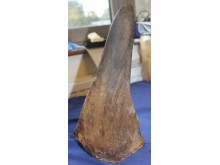 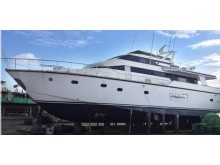 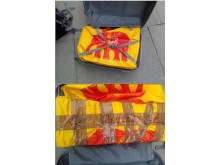 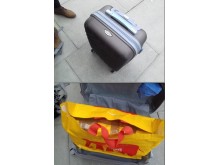