The first detailed analysis of enforcement of the Covid-19 regulations in London has established that there is a strong correlation to hot weather and holiday periods contributing to people being out and breaching the legislation in the earlier part of lock down and that the first month of the new legislation saw the most enforcement activity.

"From the start, policing this new legislation has been complex and I'm proud of how both the public and police in London have responded.

"Our aim has been to protect London, and not to unnecessarily criminalise where we can avoid it. We have seen, overall, good compliance when we have intervened, meaning in most cases the need for issuing a Fixed Penalty Notice or arrest has been unnecessary. I hope Londoners will be reassured as a result of the low volume of Covid-19 related enforcement that we have been using the new powers only when we have absolutely needed to.

"We have seen very few arrests of people where they have only been in breach of the Covid-19 regulations and not been committing any other offences which further demonstrates the effectiveness of our approach.

“However, as well as playing our part in protecting London from the spread of Covid-19, throughout this period the Met has been determined to remain proactive and target those involved in violence and wider criminality. We have seen police proactively undertaking patrols and targeting crime hotspots. Where people have been arrested for another criminal offence whilst also breaching the regulations, they have also been arrested for this breach thus increasing the apparent number of arrests for Covid-19 regulation breaches.”

The MPS has adopted a proportionate approach to the enforcement of breaches of the Covid-19 legislation from the outset. It has set out to Engage, Explain and then Encourage people to adhere to the regulations. It is only when this approach has been unsuccessful that Enforcement has been necessary.

Since the introduction of the new legislation the MPS has made very clear that its policing approach will be to help explain the new laws and encourage Londoners to play their part in adhering to them to help prevent the spread of Covid-19. Officers have reported that in most interactions once they have explained that an individual or group were in breach they have followed police advice without the need for the use of our enforcement powers.

This approach explains why such a low number of FPN’s (973), and an even lower number of arrests for a breach of the regulations alone (36) have been seen in comparison to the approximate nine million population of London.

Alongside this approach the MPS have implemented a rigorous quality assurance process to monitor the use of FPNs and to ensure they were issued appropriately and correctly.

Due to overall FPN and arrest numbers being so low this is the first detailed analysis that we have been able to undertake looking at data over an almost two month period to understand some of the trends.

Whilst the volume of FPNs and arrests across London has varied from area to area, we have seen a general correlation against the locations which were priority areas for policing, such as high violence areas. It is of note that during this period we have undertaken significant proactive policing activity targeting violence, drugs, robbery, domestic abuse, speeding and other offences to keep communities safe.

Where enforcement has been necessary we have seen a correlation with weather in the early part of lock down, age and gender.

The reasons for this are likely to be complex and reflect a range of factors. This includes interactions between the areas subject to significant proactive policing activity targeting crime hot-spots and both the variation in the age-profile and geographical distribution of ethnic groups in London.

We have a rigorous checking process in place to ensure all FPNs have sufficient evidence, have been completed correctly and have been issued appropriately and in line with the legislation before they are submitted to ACRO to be issued.

The report is available in the attached document below. 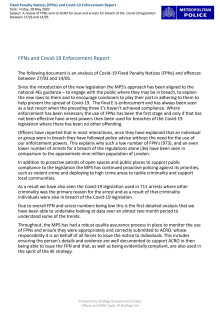