Through the most significant operation the Metropolitan Police Service (MPS) has ever launched against serious and organised crime, officers have disrupted murder plots, arrested some of London’s longest-standing and most dangerous criminals and seized more than £13 million in cash.

Over the last three months, European partners and the National Crime Agency (NCA) have shared data with the MPS relating to messages sent via an encrypted communication system called Encrochat. They obtained this information through an international operation named Venetic.

The data passed to the MPS revealed there are approximately 1,400 London-based users of Encrochat. The encrypted handsets allowed users to securely communicate on a platform which up until now was impenetrable. International partners have now successfully accessed and dismantled Encrochat – disrupting one of the key communication networks used by the some of the most serious offenders.

On receiving data relating to those using the devices in London, the MPS launched an operation named Eternal to target those using them for criminality.

Over the last few months, specialist detectives across the Met have worked relentlessly to form investigations around those utilising these handsets to commit some of the most serious crimes across the capital. They have monitored hundreds of handsets and analysed thousands of encrypted messages to build dozens of cases.

The operation has revealed the criminality of individuals who were previously unknown to the MPS, as well as provided evidence to prosecute a significant number of known criminals who regarded themselves ‘untouchable’ and remained beyond the MPS’ reach – until now. This operation has enabled detectives to place these individuals at the centre of networks of criminality.

So far, the MPS has achieved results in 38 separate investigations under this operation and arrested 171 people for offences including conspiracy to murder, possession of firearms, money laundering and conspiracy to supply Class A and B drugs.

A total of 110 people have been charged so far, and officers have seized more than £13.4 million in cash - £5 million of this in one operation alone. This is the largest single cash seizure the Met has ever made.

Officers have recovered 16 firearms, including Scorpion submachine guns and revolvers, seized more than 500 rounds of ammunition, 37 encrypted devices, 620kgs of Class A drugs and 19kgs of Class B drugs.

Those arrested under one investigation were identified as being part of the most high-harm Organised Crime Group (OCG) in London, with long-standing links to violent crime and the importation of Class A drugs. The central figures of this group lead lavish lifestyles and live in multi-million pound properties with access to top of the range vehicles.

They appear to be successful, respectable business people but they are dangerous individuals. Our enforcement activity against them reflects this – we used our most highly trained firearms officers and sophisticated tactics to arrest them at their addresses.

Another investigation clearly demonstrates the link between international organised crime and serious violence across London. It focused on an OCG spanning the UK, Europe and UAE involved in the importation and distribution of cocaine and firearms.

This network was actively supplying drugs to street gangs across the MPS who protect and advance their criminality through serious violence on the streets of London.

In June, detectives identified a plan by this OCG to shoot and kill a member of a rival group. Their investigation meant they were able to take action to prevent this. An individual was arrested for conspiracy to murder, and a loaded pistol - believed to be the planned murder weapon - was seized from an associated search of an address.

These are just some of the results from Operation Eternal which is continuing at full speed and will result in further arrests and seizures over the coming weeks and months.

Commissioner Cressida Dick said: “This operation is the most significant activity, certainly in my career, we have ever carried out against serious and organised criminality across London.

“Organised crime groups have used encrypted communications to enable their offending. They have openly discussed plots to murder, launder money, deal drugs and sell firearms capable of causing atrocious scenes in our communities. They were brazen and thought they were beyond the reach of the law.

“Organised crime does not respect geographical boundaries. Those responsible for it adapt quickly and take advantage of every opportunity. This operation has enabled us to target those at the top of the hierarchy and individuals we have known about for years but have not been able to tackle head on.

“This offending has a direct impact on our communities – those involved appear to have an air of respectability, but their actions leave a trail of misery and are inextricably linked to the violent scenes we see play out on our streets. Our investigators, intelligence analysts, firearms officers, Territorial Support Group and our local officers have worked day and night over the past two months to progress our investigations as part of this operation.

“Through this work with our international partners, we have significantly developed our understanding of organised criminality in London and the ways in which some of our most prolific and dangerous offenders operate. This is just the beginning, there are many more people we are investigating. We know who they are and we have seen what they are doing and who they are doing it with. We will not rest until they have seen justice.”

A quantity of drugs seized under Operation Venetic

A quantity of cash seized by officers under Operation Venetic

A photograph of £5.1m cash seized under Operation Venetic

An encrypted phone seized by officers under Operation Venetic 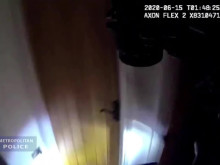 Armed entry at an address under Operation Venetic. (No live ammunition was fired during this warrant).