Following a proactive operation, officers from the Met’s Specialist Crime North have seized over 100kgs of Ketamine and arrested a number of individuals in relation.

On Thursday, 5 March, Met officers witnessed [A] a lorry driver hand over six white boxes to [B] the driver of a black BMW at a commercial property on North Orbital Road, St Albans, AL2.

The BMW driver was stopped in Watford where he was found in possession of the six white boxes – which contained 60kgs of Ketamine. [B], a 66-year-old man was arrested for being concerned in the supply of controlled drugs.

Officers then returned to the commercial property and arrested [A] for conspiracy to import Ketamine in regards to the 60kgs he supplied the BMW driver, as well as another 50kgs he supplied another man [C] on Sunday, 1 March at a service station in Surrey.

Following a search of [B]’s home address, officers found a further 60kgs of Ketamine. He said that he had been asked to collect the packages for a male family member who was subsequently arrested [D].

All suspects remain in custody.

Acting Detective Inspector Johnny Baker, from the Specialist Crime North Command, said: “Absolutely no valid reason has been provided as to why any arrested party was selling or buying 170kgs of a product, that is most commonly used as an anaesthetic for animals, without the appropriate paperwork or licences.

“I’m aware this illegal, and frankly dangerous drug, can sometimes be used by people during so-called ‘Chemsex hook-ups’, which have been described by the Met’s LGBT+ Advisory Group as the ‘crisis of our time’ for LGBT+ communities.

“By making these arrests I have no doubt that we have started dismantling an organised drug ring that was planning on selling this substance to line their own pockets."

[C] Andrew Currie (24.06.67) of Aintree Close, Uxbridge, UB8 was charged with possession with intent to supply Class B drugs (Ketamine) on Monday, 2 March.

He was remanded to appear at Uxbridge Crown Court.

He has been further remanded. 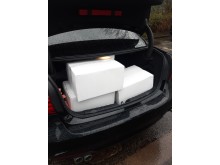