As more and more people gradually venture out in the Capital, specially-trained Project Servator officers have been deployed across London every day during lockdown, watching for people with terrorist and other criminal intent.

With the lockdown restrictions easing and more public spaces starting to open up these officers from the Met Police, City of London Police and British Transport Police are asking the public and businesses to join them in being vigilant for suspicious activity.

Chief Superintendent Dawn Morris, head of the Met’s Protective Security Command, said: "Over the past few weeks lockdown has meant that we have not been able to go about our daily lives as normal, but that doesn't mean that potential terrorists or criminals haven't been out and about. Since lockdown started, our skilled Project Servator officers have stopped people with criminal intent, seizing knives, suspected drugs and cash believed to be linked to crime."

"While many people will now be looking forward to going out to some of their favourite places, unfortunately there’s a good chance that others who have criminal intent may be in the same locations looking to exploit the easing of lockdown.

"We will continue to work hard to help keep you safe as lockdown eases, but you have a key role to play. We need everyone - from hairdressers to pub patrons - to help us by being vigilant and to report suspicious activity."

You can report any suspicious activity, in person, to an officer on the street, or to relevant security staff or personnel. Suspicious activity can be reported online via the ACT website: www.gov.uk/ACT or by calling police, in confidence, on 0800 789 321.

To help keep everyone safe from the threat of terrorism and wider criminality police across London will be using a range of activities. In the coming weeks, Project Servator will continue with daily deployments of uniform and plain clothes officers who are specially trained to spot signs that someone may have criminal intent.

Project Servator deployments are unpredictable in terms of their timing, location, duration and the assets used with the officers. Deployments often include support from a wide range of other highly-skilled policing teams, such as the Dogs Unit and Mounted Branch. Project Servator teams also work in close partnership with local businesses and communities to help maintain a network of vigilance for suspicious activity, so that even when they aren’t there, they still are.

In one case, Project Servator officers working in Tower Hamlets stopped a man driving a car. Quantities of various drugs were found on him and in the car. The man was arrested on suspicion of drugs offences. The officers then searched his home address, from which they retrieved cash totalling more than £6,000.

In another case, Project Servator officers working with the Roads and Transport Policing Command at Barking Station stopped a man they spotted behaving suspiciously. They found he had a quantity of cannabis on him. A further search was carried out at his home address and officers retrieved two large knives as well as 12 i-Phones. The man was arrested on suspicion of possession with intent to supply class B drugs and handling stolen goods.

Throughout the lockdown, officers from the Met’s Protective Security Operations Command have also continued to provide counter terrorism advice, training and guidance to thousands of businesses across London, to help ensure staff remain security-conscious, alert for any suspicious activity and know what to do should the worst happen.

Everyone has a role to play in helping to keep our communities safe and it is vital that the public remains vigilant and reports any suspicious activity to police.

Every year thousands of reports from the public help police tackle the terrorist threat. If you see or hear something that doesn’t seem right, trust your instincts and ACT by reporting to police in confidence at https://act.campaign.gov.uk/.

Reporting won’t ruin lives, but it could save them. Action Counters Terrorism.

If you would like to learn more about the sort of suspicious activity to watch out for, try the free online training at https://ct.highfieldelearning.com/ 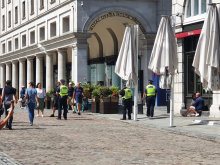