The mother of a 26-year-old man murdered in Hackney is appealing for help to bring her son’s killers to justice.

Abraham Badru, a personal trainer, died after being shot as he opened the boot of his car on Ferncliff Road on 25 March 2018.

As the investigation continues, his mother Ronke is pleading for anyone with information about what happened that night to come forward.

“Abraham was my only son but it was like having a thousand sons. He was my joy and my reason for living, he made me happy all of my life," she said.

“Since that day I have put on a brave face but in reality things are very different. I have had to quit my job as I found it too difficult to cope and I cry for my son every day.

“His graduation photograph is the background on my phone and every time I look at it I remember how proud he made me. Now all I have left is these memories.

“There are people out there who know what happened to Abraham and I would ask them to provide information anonymously – anything you say might help.”

A £20,000 reward remains on offer for anyone with information leading to the arrest and prosecution of those responsible for Abraham’s murder.

Detective Chief Inspector Noel McHugh, who is leading the investigation, said: “It is heartbreaking to hear what Ronke is going through and how Abraham’s death has left an irreplaceable space in her life.

“There are people out there who know what happened and we are directly appealing to the girlfriends, mothers and friends of individuals in criminal groups to think about whether they have information that could make the difference and ease her pain.

“Although we are making progress, this investigation has been met with a wall of silence and we need you to provide what could be the crucial piece of the jigsaw.

“There is an individual still at large who has killed someone and we all have a duty to bring them to justice.

“We have looked into many lines of enquiry and we would ask the public not to make assumptions that we already have all of the information we need.

“If you were there or have heard anything since, please get in touch.”

Detectives remain keen to speak to a man and woman who were on Ferncliff Road on the night of the murder.

The woman, who was white and wearing a three-quarter length Puffa-style coat and a white male wearing shorts, were both seen nearby shortly after Abraham was killed.

A call was also made to the police incident room in June 2018; police are very keen for that person to get back in touch as believe they have vital information.

Abraham had spent 25 March 2018 – which was a Sunday – shopping, collecting a takeaway and seeing his father. Between 22:20 and 22:40hrs he visited a woman before travelling home. During the journey home he had a phone call with another woman lasting 44 minutes. At 23:11hrs he was fatally shot while still on the phone.

Police were called to the scene following reports of gunshots heard. Abraham died at the scene from a shotgun wound to the chest.

Moments after the shooting, a black male believed to be wearing a black Puffa-type jacket ran from the scene, before getting on a bicycle. He had a rucksack on his back. The bicycle is described as white and didn't have any lights.

DCI McHugh added: “We understand that people may be scared to come forward or feel like providing information to police is not the done thing.

“We would urge those people just to look at Abraham’s mum and the pain she is going through. You could help remove some of that pain simply by giving us a call.”

Anyone with any information is asked to contact the police incident room in the strictest confidence on 020 8785 8099. Alternatively, to remain anonymous call Crimestoppers on 0800 555 111 - they will not ask your name or trace your call. You can also visit www.fearless.org to pass on information anonymously.

In addition to witnesses and those with information, detectives also wish to speak with anyone who knew Abraham but has not yet been in contact with police.

If you need help or information to support someone you suspect is involved in knife crime, or you want assistance yourself, then you can visit www.knifefree.co.uk or LondonNeedsYouAlive.

+ One arrest has been made in connection with the killing - an 18-year-old woman [A] arrested on suspicion of conspiracy to murder in November 2018 has been released under investigation.

On Monday, 9 September, homicide detectives from Specialist Crime interviewed a 20-year-old man under caution within a London prison. 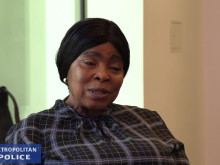