It is the priority of the Met police to keep its communities safe. As part of our planning for this weekend, we have learnt some people are coming into London to cause harm and are likely to bring weapons with them.

The Met have been working hard to ensure those people who are coming to London to voice their concerns are kept safe. Unfortunately, we are also aware there are some who are distorting that message and we believe are intent on causing harm.

Due to the information received, and our need to keep people safe, we are now implementing a section 60 into the areas of protests.

Commander Bas Javid said: “The safety of protesters, officers and the public this weekend is of the upmost importance, and it is for that exact reason why we have consulted with colleagues and partners, and decided it is proportionate to put in place a Section 60.

“It is our job to protect those who are coming into central London today, and this tactic is one of the best available to us, which allows us to seize offensive weapons that have absolutely no place on our streets at any time of the day.

“Whilst we believe there is no imminent threat to the public, we want people to be aware of why they may be stopped by London’s officers, spoken to, and possibly searched as well. Officers will, as always, be professional and courteous and I really want the public to speak to police if they have any concerns about why they are being stopped and spoken to.”

It covers the areas of:
- Bayswater Road across to Holborn
- Kingsway to Elephant and Castle
- Kennington Lane to Battersea Park Road
- Kensington Road to Queenstown Road

A map is available to show the full area covered.

Yesterday, Friday, 12 June, conditions were also placed on the demonstrations planned for this weekend.

Commander Javid added: “We will not tolerate any violent disorder like we saw last weekend - and anyone who thinks they can commit a crime or vandalise property will be arrested." 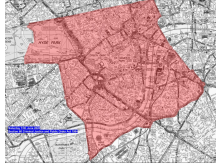