Detectives have released CCTV footage of a man they would like to speak to in connection with an assault that took place in Sidcup, Bexley.

On Thursday, 21 May at 05:38hrs, police were called to an address in Dartford to a report of an assault that took place the previous evening.

The victim, a 19-year-old woman, was taken to hospital by the London Ambulance Service where they confirmed she had suffered from a broken collar bone and a cracked skull.

The man is described as white, tanned, aged in his early 30s, around 6ft 2ins tall, of a large build and with dark brown hair. He has several tattoos on his upper body and was wearing black shorts.

Detective Constable James Steel, from the Met’s South East BCU, said: “We would like to identify and speak to a man and his two associates who are believed to be involved in an assault. The victim was attacked near to the White Cross Pub. I would urge anyone with information to contact police.”

Anyone with information is asked to call 101 or tweet @metcc quoting the image reference number 046142.

To remain anonymous, call Crimestoppers on 0800 555 111 or contact them via crimestoppers-uk.org 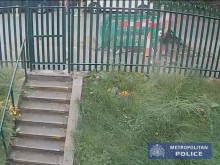