At Woolwich Crown Court on Tuesday, 10 March a 17-year-old boy was found guilty of murder at the culmination of a four week trial.

Police were called to Corrance Road shortly before 14:00hrs on Thursday, 15 August 2019 and found Solomon, 18, with multiple stab injuries. Despite the efforts of paramedics, he was pronounced dead at the scene.

The teenager, who cannot be named for legal reasons, will be sentenced at the same court on Monday, 9 April.

Around half an hour before his death, Solomon had been walking down Corrance Road with a female friend who needed to use the cashpoint at a nearby supermarket.

As they approached the supermarket, they passed a kebab shop outside which, was Solomon’s attacker.
The two boys spoke for a short time and the court heard how Solomon’s friend thought that although they seemed to know each other, the other man was rather cold towards Solomon.

Following this brief interaction, Solomon’s friend realised she did not need to use the cashpoint and the pair went into the supermarket instead.

After this, Solomon and his friend went to a café on Acre Lane before they headed to a friend’s house. As they began walking in the direction of Corrance Road, the pair passed Solomon’s attacker again.

CCTV footage showed that forty seconds after this second meeting, the 17-year-old followed Solomon and his friend as they walked across Acre Lane and into Corrance Road. Solomon told his friend that he was aware that they were being followed.

The 17-year-old then approached Solomon and began asking him questions. The court heard that his demeanour changed and the pair began fighting.

During the fight Solomon suffered a number of stab wounds but still managed to stop the 17- year-old from getting close to his female friend. The court heard how Solomon pulled his attacker away from his friend.

The 17-year-old fled the scene and Solomon’s friend dialled 999.

Within five minute officers were at the scene on Corrance Road. Immediate enquiries were launched into the movements and identity of Solomon’s attacker.

Homicide detectives used CCTV to track the route that the 17-year-old took as he left Corrance Road.
Four days later, on Monday, 19 August 2019, officer’s recovered burnt clothing following searches at a number of addresses in Brixton. Testing identified that DNA taken from the clothing could have originated from Solomon’s attacker.

The following day, Tuesday, 20 August 2019, and accompanied by his mother, the teenager handed himself into police. He was arrested and subsequently charged with murder.

Throughout the course of several interviews the teenager repeatedly answered ‘no comment’ to detectives’ questions.

He said: “Solomon Small had his life tragically cut short by senseless violence. Even in his last moments Solomon displayed unimaginable bravery. He pulled his attacker away from his friend to protect her even though this meant that he was wounded further.

“This has been an incredibly difficult time for Solomon’s friends and family and I hope that this verdict brings them some peace. I want to commend Solomon’s friend who witnessed the attack and was with him as he died. She has shown incredible bravery, not only at the time of the murder, but also throughout the subsequent police investigation.

“There is no justification for such brutality. Tackling violence such as this remains a top priority for London policing.”

In a statement, Solomon’s family said:

“First and foremost we thank God for everything he has done for us in this case.

“We would also like to thank everyone who has supported us over the past seven months including our legal team and all the investigators. Our heart goes out to everyone who has lost a loved one through violence. We know your pain is unexplainable by words.

“As children of Rastafari, spiritually, we pray for Solomon’s soul. We are humbled in the knowledge that God will receive, guide and nurture him in his transition within the next realms of his life.

“It saddens me to see so many youths have taken the wrong road and have got caught up in a negative lifestyle.

“Instead of each area formulating themselves into gangs I’m proposing that they formulate into businesses and if you want to challenge each other do it by establishing which business is more successful. This way instead of having gangs fighting each other we will have a multitude of businesses run by young entrepreneurs of the future, instead of planning how to stab and kill each other over trivial things.

“Our faith teaches us to seek peace and pursue it because it is the will of God for man.

“We pray The Most High grants us the spiritual, physical and mental strength with courage to carry on. The great pain and anguish of losing our child and the manner in which his life was taken will always be with us.”

+ If you have information that could help keep your community safe, but don’t want to speak to police, please contact the independent charity Crimestoppers 100% anonymously on 0800 555 111. They do not ask your name and cannot trace your call or I.P address.

Any young people who have information about violence or knife crime, can visit www.fearless.org where they can pass on information anonymously – your I.P address will not be traced. Fearless is part of the Crimestoppers charity, and is independent of the police. 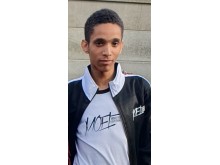