The Metropolitan Police Service is today launching its most ambitious police constable recruitment campaign to date featuring the voices and stories of serving officers, as it seeks to double the number of new recruits joining in the next year.


The ‘Do Something Real’ campaign aims to show the breadth and variety of a policing career and the motivations of serving officers to make a difference to the lives of Londoners. The Met is seeking to recruit more than 2,000 new officers in the next year – more than double the number who joined last year - to take its total strength to 30,750.


The campaign will be seen across London in the coming months and features 11 officers who explain why they joined up. Acting Sergeant Stevie Bull who featured in the campaign, said: “The Met is built by its people; we need people that are passionate, driven and ready to embrace change. I wanted to contribute to finding these people. I am proud to be a police officer.”


PC Phil Cresswell-Nash, said: "I want people who are not part of the police family to actually see what a fantastic job it really is. Being a police officer is far more than a policing job, it’s really a vocation that embodies many other roles such as social worker, friend, coach, even therapist!


"I love working for the Met as it’s given me experiences I know other jobs certainly would not have given me."


Commissioner Cressida Dick, said: “London deserves the best police service and we intend to attract individuals who reflect the best of London. People who are passionate about serving, protecting and working with its diverse communities.


“Our officers come from all walks-of-life, and join for all sorts of reasons. But whatever your reason, this job can offer things you’ll find nowhere else.”

New features of the recruitment campaign reflect research into what either drives people to join or puts them off the idea. The current campaign sees two main policy changes: improvements to the package for candidates so they can avoid upfront payments for their initial qualification; and a partial relaxation to its policy on visible tattoos.


The Met will now fund the Certificate of Knowledge in Policing (CKP) from private colleges and has integrated the courses into the training programme so recruits will be paid as trainee officers whilst they complete the course and will no longer need to obtain the CKP before applying.


Recent updates to the Met’s policy on visible tattoos reflect changed views on tattoos in society. The Met will now review candidates who have a visible tattoo on a case-by-case basis instead of automatically rejecting them. It is understood that tattoos form part of many cultures and have become an increasingly common practice among young people.


As a new police constable in the Met, the starting salary is £27,105 per annum inclusive of additional allowances. After completion of the CKP (usually within three months of joining), this automatically increases to £30,321 per annum. The salary increases to a current maximum of £45,885 inclusive of London allowances, achievable after seven years’ service.


To view the campaign video ‘Do Something Real’ please visit: https://youtu.be/FuNa4bkzDyM

To find out more about joining the Met, please visit: www.metpolicecareers.co.uk/newconstable 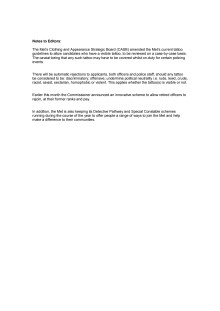