Three males have pleaded guilty to Public Order Act and other offences following a police investigation into a homophobic incident on the N31 bus route.

The three suspects, aged between 15 and 16 years, appeared at Highbury Magistrates' Court today (Thursday, 28 November) following a hate crime incident against two females on the N31 bus in the early hours of Thursday, 30 May.

They will be sentenced on Monday, 23 December.

[A] a 16-year-old boy pleaded guilty to handling stolen goods (namely a phone) and two offences contrary to section 5 of the public order act.

[B] a 16-year-old boy pleaded guilty to a section 4a of the public order act offence (namely an aggravated hate crime). A Newton hearing will take place tomorrow (Friday, 29 November) for [B].

The investigating officer, Detective Constable Darren Barlow, from the Met’s Roads and Transport Command (RTPC), said: “No one should ever be victimised because of their sexuality and I hope that this result brings some form of closure to both victims and they can put this ordeal behind them.

Detective Superintendent Andy Cox, from the Met’s Roads and Transport Command, said: “Any Hate Crime on London’s transport network, or anywhere else in London, will absolutely not be tolerated. The Met’s RTPC officers will always fully investigate crimes that are committed on the bus network and we would urge anyone who has been a victim of crime to contact us.

“The transport network in London is, and remains, extremely safe and occurrences of this nature are few-and-far between.”

Mandy McGregor, Head of Transport Policing and Community Safety at TfL, said: "This sickening incident was utterly unacceptable. Homophobic abuse is a hate crime and won’t be tolerated on our network. All of our customers have the right to travel without fear of verbal or physical abuse.

"We hope this case reminds all of our customers that they should accept everyone for who they are and they have absolutely no right to abuse them.”

At approximately 0230hrs on Thursday, 30 May, two women, both aged in their 20s, boarded the bus in West Hampstead.

As they sat on the top deck, they were approached by a group of males who began to make lewd and homophobic comments and gestures to them.

A fight ensued which left both victims with wounds to their faces after being punched several times by the suspects and a phone and bag were stolen.

Officers and London’s Ambulance Service (LAS) attended and both females were taken to hospital for treatment to facial injuries.

Officers from the Met’s Roads and Transport Command identified the suspects and arrested four men, aged between 15-17 on Friday, 7 June, on suspicion of robbery and aggravated GBH. They were taken to separate London police stations for questioning.

A fifth male, 16-years-old, was arrested on Saturday, 8 June on suspicion of robbery and aggravated GBH. All five were bailed to a date in early-July.

On Thursday, 25 July, four males [A, B, C and D] where charged. They appeared at Highbury Corner Youth Court on Wednesday, 21 August and were bailed until today.

At court today, charges were dropped against [C].

Superintendent Waheed Khan, the Met’s lead for Hate Crime, concluded: “London is such a diverse and tolerant city and I know that the public were rightly outraged that something of this nature could take place in our city.

“Hate crime affects people from all walks of life, and impacts on communities across London. The Met does not tolerate any form of discrimination, and is committed to working with partners, including MOPAC, to robustly tackle hate crime.

“We would urge hate crime victims who have not spoken to police to come forward and tell us about incidents so they can be fully investigated.” 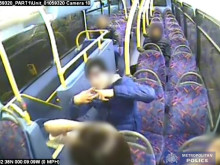 CCTV of a homophobic incident on N31 bus