Police were called at around 18:05hrs on Sunday, 29 March by a man reporting his moped had been stolen from him in Kirchen Road, W13. He told officers that a car pulled up and the occupants threatened him with baseball bats and a knife before one of them rode off on the moped.

The car also made off from the scene and its description was circulated to officers. Utilising ANPR technology, it was tracked in Fulham around an hour later and officers managed to box the car in on Pearscroft Road, SW6, so avoiding the need for a pursuit.

Two men, both aged 21, were removed from the car and arrested on suspicion of robbery. One of the men was further arrested for possession of an offensive weapon after a lock knife was found on him. Both remain in custody.

Anyone with information is asked to contact police on 101 or tweet @MetCC and quote CAD 4005/29March. You can also call the independent charity Crimestoppers anonymously on 0800 555 111.

“Our main focus was to arrest those responsible for this crime as quickly and as safely as possible, and we will use all available technology, including ANPR, to achieve this.

“With colleagues across the Met, Operation Venice will continue to identify and pursue those intent on committing brazen and violent crimes on the streets of London.” 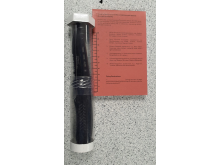