The Met’s police dogs (PD) had a busy day assisting their human colleagues across London on Monday, 11 January.

In Enfield at 01:22hrs police were called to a man trying car door handles. The man was found and PD Yara prevented his escape. The man was arrested for motor vehicle interference and further arrested for theft when he was found in possession of a Sat Nav, believed stolen from a car.

In Redbridge at 01:30hrs PD Hugo and his handler were out and about and responded to a call where traffic officers were chasing three men in a stolen Range Rover. All three ran off and one was arrested, but the other two were lost. PD Hugo took up the search and his nose led him to a bin shed. He indicated officers should look in two bins and both men were found completely concealed amongst the rubbish and arrested.

In Putney at 02:35hrs PD Ruby assisted in the search of a car and found a quantity of cannabis hidden behind the dashboard; the driver was arrested for possession of class B and drug driving.

At around 12:00hrs in Greenwich a dog section officer tried to stop a stolen Ford Kuga, but the car made off. The car later crashed and the two occupants ran off, PD Georgie was sent to detain the driver while PD Taz detained the passenger - both were arrested. As well as the car being stolen, concealed inside the vehicle were two metal bars and a large amount of drugs and cash.

Finally, back in Redbridge at 20:30hrs PD Hugo and PD Nahla were asked to assist with a search for evidence following a stabbing. During the search PD Hugo found a knife which matched the description of the weapon that had been used. Not to be outdone, the dog handlers searched the area and located a parked car believed used in the stabbing. When the suspect was seen to return to the car the dog section officers followed the car and PD Nahla then assisted the officers with the stop and arrest of a man on suspicion GBH.

Chief Inspector David Rhodes of the MO7 Taskforce who look after the dog unit, said: “Whether it is assisting officers to find concealed evidence, detecting offences or finding suspects who have gone to ground, police dogs and their handlers are invaluable. This is a just a snapshot of some of the work undertaken by officers and police dogs across London in one day. I am sure that many criminals would escape justice and crucial evidence remain undetected if not for the assistance of the Met’s police dogs.” 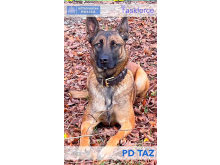 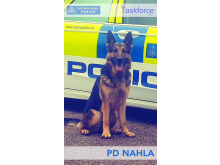