Nithiyakumar had previously pleaded guilty to manslaughter at the same court on Friday, 30 October and was remanded in custody to await sentence.

Police were called to the address on Aldborough Parade at around 17:30hrs on Sunday, 26 April to reports of a man and two children having been injured. The children were found suffering from knife wounds.

Pavinya Nithiyakumar, aged 19 months, was pronounced dead at the scene and three-year-old Nigish Nithiyakumar was taken to hospital by London Ambulance Service (LAS) where he subsequently died.

Nadarajah Nithiyakumar was also found at the scene suffering from a knife wound. He was taken to an east London hospital for treatment where he was arrested on Wednesday, 29 April.

He was discharged from hospital on Thursday, 7 May and was charged on Friday, 8 May with the murder of both children.

Following charge, Nithiyakumar underwent a series of psychological evaluations for both the prosecution and the defence. Both outcomes indicated that at the time of the offences, he was suffering from a delusional disorder. Based on these findings, the court agreed to accept a guilty plea to manslaughter with diminished responsibility.

Detective Chief Inspector Vicky Tunstall said: “This has been a truly tragic case. Despite the conclusion that the defendant was mentally ill at the time of the deaths, the loss felt by the children’s families will be unending and our thoughts are with them at this sad time.”

Speaking about Nigish and Pavinya in a statement read in court, their mother said: “After my children were born I was the happiest woman in the world, every minute of my time I spent with my kids, these were my happiest moments. They were both my world and my future ambitions and my life surrounded them. I spent all my time with them. Of course, they loved their dad but they were very close to me and we did everything together. I have lost all those dreams and aspirations I had for them.

“Nigish was such an active boy; he just started to speak recently and was a very clever child. He never was any trouble and the perfect child. He was playful and loved to be outside playing and watching the buses and cars going by. He loved his building blocks and toy bus; I so miss watching him play with his toys.

“Pavinya was a blessing and miracle. She was a beautiful child who was the opposite to Nigish, she would make a lot of noise when she played and was very happy and messy in her play and smiled a lot.

“I loved my children so very much and expected great things for them and I wanted them to be happy and be their own heroes in whatever they did. They made me so happy and proud.’’

In response to negative publicity toward the children’s mother in international media, her family said: “We want everyone to know that what happened had nothing to with her. Everyone needs to know that she was not at fault. We want to raise awareness and for everyone to understand that this can happen to anyone and that mental health can be hidden.” 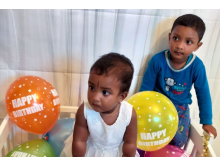