On the one year anniversary of the murder of 16-year-old John Ogunjobi in Tulse Hill, detectives are continuing to appeal for anyone with information to come forward.

A reward of £20,000 is available for information that leads to the arrest and conviction of the person or people responsible for John’s murder.

Officers attended along with the London Ambulance Service (LAS) and found 16-year-old John collapsed in the street with stab injuries. Despite the efforts of paramedics, he was pronounced dead at the scene at 23:41hrs.

A post-mortem examination at Greenwich Mortuary gave cause of death as a stab wound.

T/Detective Superintendent Richard Vandenbergh, investigating, said: “One year has passed since John was fatally attacked, but our determination to find those responsible and bring them to justice has not diminished.

“John was just 16-years-old and his life had barely begun. We believe he was attacked by a number of suspects, and know that the altercation was witnessed by a number of people, some of whom have still not come forward to

tell police what they know. It is also quite likely that some of John’s own friends may hold vital information, but are yet to talk to us.

“I am all too aware that some young people may be reading who want to engage with us but are afraid that someone might find out. If that is you, I want you to know that we can work together, in the strictest of confidence. Or, if you prefer, you can contact the independent charity Crimestoppers, 100% anonymously, and tell us what you know that way.

“It cannot be right that a young man’s murderer is walking around free while his devastated family still wake each day, not having properly begun to mourn yet. Work with us and we can get the justice John’s family deserve.”

Officers are re-releasing CCTV footage of a black Audi Q5 vehicle, registration number LB11 XPJ (False plates) and a light coloured VW 5-door Polo, with damage to the corner of its offside rear bumper. The two cars were seen shortly before and after the stabbing at around 22:50hrs on Monday, 5 November 2018.

Earlier at 22:41hrs, the black Audi was captured on CCTV at Texaco petrol station in Croxted Road, Dulwich having come from the direction of West Dulwich. A man wearing a long green puffa coat and purple latex gloves was seen to fill the car with petrol. False plates have been used on the car. It was then seen leaving the garage at 22:43hrs, heading in the direction of Norwood Road.

On Tuesday, 6 November the black Audi Q5 was found to have been burnt out on the Gunsite Allotments, Grange Lane, Dulwich. Checks revealed that this vehicle, under the correct registration number, had been stolen from Burbage Road on 12 October 2018.

Detectives are asking anyone who may have seen these cars in or around the Tulse Hill area at the time of the incident to come forward and speak to them. 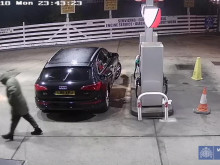