Police have released images of a man they wish to speak with after a bus driver was assaulted in south London.

At approximately 11:55hrs on Monday, 20 July, the bus driver – who was taking a break – was approached by a man on Atkins Road in Lambeth.

The man boarded the bus before punching the victim in the face.

The 43-year-old driver attended hospital where he was treated for serious facial injuries.

Officers have established that a motorcyclist had earlier been involved in an altercation with the victim at a set of traffic lights.

PC Nick Kortright, from the Roads and Policing Command, said: “This was a completely unprovoked attack which has left the victim with an eye injury. As a professional driver, this is clearly of significant concern to him.

“I would urge anyone who recognises the man in the CCTV stills to contact us.”

Anyone with information should contact the RTPC via 101 or @MetCC. 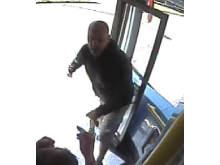