Detectives are releasing CCTV images of a man they want to speak to after a football coach was knocked unconscious during an argument in Fulham.

At approximately 19:40hrs on 2 October 2020 the victim was in the Eel Brook Common area when he was approached by a group of teenagers who asked to borrow a football.

He gave them permission to use a ball but the group then left the area without returning the ball. The victim followed the group and asked for it to be returned.

During this time another group of older people, who were known to the teenagers, arrived at the location and became involved in a confrontation with the victim.

One man punched the victim which caused him to fall and hit his head on the ground which resulted in him being knocked unconscious. The group fled the scene in the direction of Fulham Broadway.

Police were called and he was taken to hospital with a head injury. He suffered a two fractures in his jaw and required surgery. He has since been discharged.

Detective Constable Zachery Donohoe, from the Central West Command Unit, said: "This was a shocking and unprovoked attack and the victim continues to recover from his horrific injuries. I would urge anybody who recognises the man in these images to contact us immediately." 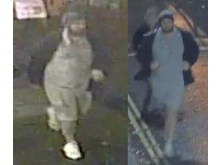