The parents of a primary school age child sexually assaulted at night in their own home have spoken out for the first time as detectives released new moving footage showing a man they want to speak to in connection with the incident.

Police were called around 00:20hrs on Saturday, 23 November to a residential property on The Greenway, Ickenham, following a report that a man had gained entry before sexually assaulting the young boy in his bedroom. The man fled the scene after the child told him that he would phone the police.

The moving footage released by the Met today [Wednesday, 11 December] shows the suspect exiting Ruislip Gardens station (an overland rail station and Central Line underground) at around 23:30hrs on Friday 22 November. Another camera - a black and white image, (released previously) – captures him around twenty minutes later, at about 23:50hrs, passing a parade of shops on Ickenham Road near the junction with The Greenway.

His parents today joined officers in urging anyone with information to come forward to help police, as they spoke in public for the first time about the traumatic impact of the incident on their whole family.

His mother said: "For the first time in our lives our family are frightened. We are frightened going to and from our house, we are frightened in our home, a home that we have built, loved and felt safe in for 15 years. No one should in this day and age face such fear when at home which should be a place of sanctuary.

"Since the incident on 23 November our son has been unable to feel secure and safe, he has been unable to sleep in his own room. It’s impacted on his schooling and his activities, he is quiet but trying to be so, so brave. What he endured is something no child of his age should and the memory of what happened may fade with support but will never leave him completely.

"The thought of him closing his eyes and picturing the man wanting to harm him breaks our heart. We have tried to carry on as normal but that fear is still there in the back of all our minds and it won’t go until this man is caught. For the sake of our family putting this to rest and for the safety of others, please help us in apprehending him."

There was no evidence of forced entry to their home, and it is believed the suspect got in through an insecure door. The victim's younger sibling was also in the property at the time of the incident, but no-one else was disturbed.

“This is the third appeal we are making to identify this man in connection with our enquiries. I’d like to thank members of the public who have called in so far to help with our investigation, as every piece of information matters.

“We are yet to identify the man we would like to speak to and so hope that the brave decision taken by his parents to speak out - in tandem with the new moving images - may help progress enquiries. We know the man was in the Greenford area prior to the offence taking place.

“This remains a well-resourced investigation, and the boy and his family continue to receive specialist support. We are not confirming his exact age, or that of his sibling, in order to protect the victim's identity.

“Whilst incidents such as this are thankfully very rare, I encourage people to ensure that their homes are kept secure at all times and to report anyone acting suspiciously and to remain vigilant”.

The suspect is described as white, of slim build with short hair and stubble, and he was wearing a pair of blue jeans, a t-shirt and a dark coloured coat.

There have been no arrests as yet and enquiries continue.

Anyone who recognises the man in the images, or who was in the area at the time, ior has any other information is asked to call police on 101 or via Twitter @MetCC. Please quote CAD 145/23NOV. To give information anonymously contact Crimestoppers on 0800 555 111 or online at crimestoppers-uk.org.

​Detectives appealing for information in connection with the sexual assault of a child are releasing a further image if a man they would like to speak to. 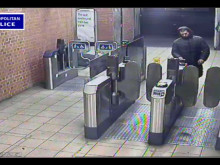