Detectives in Westminster are appealing for witnesses, or anyone who may recognise the suspects, following an armed robbery at a petrol station in Bayswater, W2.

Police were called at 08:26hrs on Monday, 26 February to reports three men, armed with weapons, robbing a petrol station.

On the day of the attack, the three men entered the store after placing bollards across the forecourt, to create the illusion that it was closed.

They then entered the Waitrose in a staggered formation with two men entering together and the third suspect coming in just behind the first two.

The third suspect, who is wearing a black motorbike helmet, approaches the member of staff and asks him to "come here."

He then produced a black handled kitchen knife and ushers the member of staff towards the office door. The other two suspects follow.

At the office door, one of the suspects tells the victim to open it before threatening him.

Once in the office, the victim opens the safe and two of the suspects remove the money.

The third suspect attempts to destroy the CCTV equipment.

The suspects then left through the fire exit walk make off in the direction of Porchester Terrace.

Anyone with information is asked to call Westminster CID on 101 and quote 1446/26FEB. Alternatively you can call Crimestoppers anonymously on 0800 555 111. 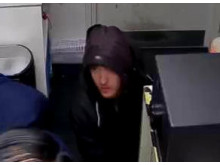