Officers are appealing for information following an arson at a residential address in Hackney.

Police were called by London Fire Brigade (LFB) to reports of a house fire on Clissold Crescent, Stoke Newington at around 08:06hrs on Wednesday, 20 June.

Officers attended the location and assisted LFB at the scene.

An investigation revealed that the fire was started deliberately in the basement of the shared house.

There were no reported injuries.

The suspect is seen on CCTV footage outside of the property, before making off down Clissold Crescent, towards the direction of Clissold Park.

He is described as being a mixed race man, aged between 35 and 40 years.He was wearing a black coat with a brown fur hood and black bottoms, with black trainers, a red scarf and a black cap with a purple and white peak with ‘Space Raiders’ written on.

The man is believed to have ridden off on a white B-twin mountain bike.

Detective Constable Dean Barnett, from Hackney and Tower Hamlets CID, said: “We believe this to be a targeted incident and it is lucky that none of the ten people inside the property - a number of whom were asleep at the time - were injured.

“We urge anyone with any information which could help progress this investigation to get in touch.”

Any witnesses or anyone with any information is asked to call police on 101, quoting 1517/20Jun or contact police via Twitter @MetCC.

To give information anonymously, contact Crimestoppers on 0800 555 111 or online at crimestoppers-uk.org 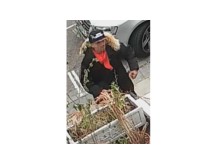