Police investigating a stabbing in Hammersmith and Fulham have released images of two men they are working to trace in connection with the incident.

The incident occurred at around 20:10hrs on Saturday, 1 August at the junction of Wolverton Gardens and Hammersmith Road.

The victim, a 30-year-old man, arrived at Wolverton Gardens in a vehicle that is also believed to have been carrying the two men pictured.

He left the vehicle and entered another car that was parked on a side road directly opposite. He was followed by the first suspect, who also got in.

An altercation then took place in which the first suspect was apparently pushed from the second vehicle, which was then driven off carrying the victim. A substantial sum of money was dispersed from the vehicle into the road.

The vehicle was then reversed at the first suspect, who managed to dodge it.

It stopped a short time later and the victim left the vehicle.

The second suspect who had remained in the first car got out of the vehicle. The first and second suspect then ran at the victim, who suffered a number of stab injuries

The victim self-presented to hospital and was later discharged.

Officers from the Central West Command Unit are investigating and have released two images of men they would like to speak to.

Detective Constable Emily Martin said: "While I appreciate the images are not of the clearest quality, I am sure there were people who would have seen this dramatic incident unfold on that evening. The victim was incredibly lucky that his injuries were not far more serious.

"I urge anyone who may have been in the vicinity of the incident to please contact us. Look carefully at the images and contact us immediately if you recognise the two men pictured."

Anyone who has information, video or images that could assist police are asked to call 101 ref CAD 7870/1 Aug. 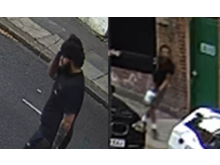 Suspect one and two 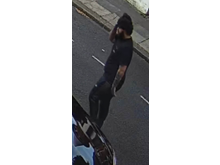 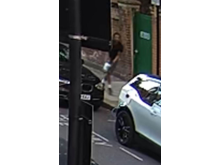