Detectives have released CCTV footage of a man they are seeking to identify after an unprovoked assault in Wembley.

On Monday, 15 February at 16:15hrs, the victim, a man in his 40s, and his wife were walking on Fernwood Avenue when an unknown man approached the couple and struck the man in the face. The victim fell to the floor from the impact of the blow.

The suspect ran off in the direction of Chaplin Road, closely followed by the victim and his wife, who initially attempted to pursue him.

At this point, the suspect produced a large knife which he pointed in the direction of the victim and began chasing him in the opposite direction back down Chaplin Road.

After a chase, lasting approximately one minute, the suspect disappeared and the victim was able to alert police.

The man is described as black, aged approximately 25 years old, around 6ft tall and of a slim build. He was wearing a black hoodie, navy blue joggers and black trainers.

PC Catherine Brady, from the North West Command Unit, said: “I am appealing to anyone who was in or driving through the area on Monday, 15 February who may have seen a man fitting this description to please get in touch.

“Any further footage from home security cameras or dash cams may help us to identify this man and hold him accountable for his violent actions that afternoon.”

Anyone with information is asked to contact police on 101 or tweet @MetCC and quote CAD 6014/15FEB21. Alternatively, you can leave information anonymously with the independent charity Crimestoppersby calling 0800 555 111. 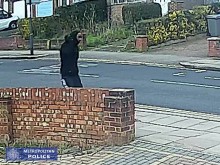 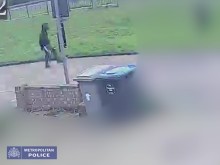 Victim on Fernwood Avenue being chased by suspect, suspect has knife out