Two years on from the murder of Malachi Brooks, who died after being stabbed in Battersea, detectives and his family are appealing for information which may help identify those involved, with a £20,000 reward for information now being offered.

Malachi, 21, who lived in Battersea and had completed an apprenticeship in carpentry, was attacked on 28 March 2017 at approximately 01:10hrs in Surrey Lane, SW11.

Four males all wearing balaclavas, hoods/face coverings pulled up in a vehicle in Surrey Lane. Three of the males got out and stabbed Malachi before getting back in the car and making off.

When the emergency services arrived Malachi was found suffering from stab injuries, efforts were made to save him but sadly he died at the scene at 01:55hrs.

A post-mortem examination gave his cause of death as a stab wound to the heart.

The Homicide and Major Crime Command began an investigation and CCTV footage obtained by detectives showed that the car used in the attack, a Nissan Micra was abandoned on Weir Road industrial estate at 01:20 hours on 28 March 2017. It was set alight 24 hours later at 04:10 on 29 March.

The burning of this car destroyed any possible evidential fingerprint and DNA connection being established between the vehicle and the murderers.
Three men were later jailed in August 2018 for perverting the course of justice and arson offences, relating to the car used in Malachi's murder.

Abdul Popatpotra, 27 (20.03.91) of Totterdown Street, SW11 and Ashrafur Rahman, 23 (23.08.94) of no fixed address were each sentenced to 21 months imprisonment after they were convicted of arson, with Rahman pleading guilty to perverting the course of justice.

Another man, Joel Preddie, 20 (29.08.97) of Chantry Way, Mitcham was found guilty of perverting the course of justice and was jailed for four years.

Despite these convictions, Malachi's killers have never been caught and the Met is now offering a £20,000 serious crime reward for information that leads to the identification, arrest and prosecution of the person or persons responsible for his death.

DCI John Massey, from the Homicide and Major Crime Command leading the investigation, said: "We remain committed to bringing Malachi's killers to justice. His family are still grieving, every birthday every Christmas is made even more difficult knowing that his killers have not yet been identified.

“We know that Malachi's attackers had been driven to Surrey Lane to commit the murder and driven from the scene. The car used was then abandoned a mere 20 minutes after Malachi was killed, with Popatpotra, Rahmam and Preddie later found responsible for destroying that evidence.

"I am sure that there are people who Malachi’s murderers are, - most likely those in Tooting or wider South London - have information to help us solve this case.

"You may be fearful of providing information, or have loyalties that are stopping you from doing so. My message would be to do the right thing and come forward.

"We are counting on you to get in touch and officers are waiting to take your call in our incident room. We would treat any information provided in the strictest confidence."

Malachi's sister, Rashaune said: "Today is the second-year death anniversary for my brother who was stabbed to death on the cold streets of Battersea. Whilst growing up with Malachi we had a very close relationship. We are two years apart in age. We grew up on Wandsworth Road and lived a happy life. Malachi is the third youngest of seven siblings. In 2009 we moved to Brixton as our property which we lived in on Wandsworth Road was too small.
In 2009 I started secondary school. I was planning to go to the same secondary school as Malachi, however The Norwood School was closer to our new house which I preferred.

At this time Malachi was in year eight and attended Southfields Secondary School. This school was in the borough of Wandsworth which he started before we moved so my mother decided to keep him there as he was comfortable, doing well in his studies and had many friends.

When Malachi left school he went onto studying an apprenticeship in Carpentry. Due to the fact we lived in Brixton which was a little way from where we grew up Malachi always used to visit his friends in the Wandsworth Borough. He also had a girlfriend which he stayed at often making it easier for him to complete his studies as well as staying around his friends which he grew up with.

Our family moving to Brixton had a huge effect on Malachi as he found it hard to adapt and make friends in Brixton. Therefore he would travel to Wandsworth to visit his friends and come home later in the day. Whilst he was traveling from home he had many issues with the youths around Brixton who always used to victimise him. One time they stole his bike and made him walk home at late hours of the night. Malachi was not comfortable with this and wanted to avoid trouble. He thought it would be easier to stay at his girlfriend’s house and travel to work. Malachi still visited us on weekends or whenever he could. Malachi stayed from time to time.

Things were just progressing for Malachi. He finished his apprenticeship course and was looking for full time work in the construction industry. He applied for his passport to go on holiday as he had never left London and was trying to get his driving licence. A couple weeks after Malachi passed we received his passport and a confirmation letter for his practical driving test.

Malachi's sister goes on to say: "Malachi was a very popular individual who was loved by many. His cheeky smile and sense of humour never leaves our memories.

Malachi was stabbed to death by three different individuals which was very traumatic. The fourth person involved was driving the car which was burnt and abandoned on an industrial estate on Weir Road.

Every day I ask myself ‘why my brother?’ Malachi was not a gang member and did not cause any harm to anyone. Malachi was trying to make something out of life. Words cannot explain how angry I feel that no justice has been served and the people that were involved are living life as normal.

The pain and grief my family have gone through with Malachi being murdered has caused so many problems. Not only have we lost Malachi but it has split up the family.

We are all finding it hard to deal with our emotions which is causing a huge effect."

Anyone with information about Malachi's death can contact the Incident Room on 020 8721 4868 or via the police non-emergency number 101.

To give information anonymously contact Crimestoppers on 0800 555 111 or visit crimestoppers-uk.org. 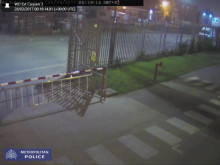 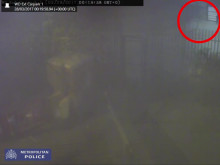 The second clip shows the four suspects leaving the vehicle and using a towpath which leads to a pathway running along the river Wandle. ...