Police have released CCTV images of a group of girls they wish to speak with following an unprovoked attack in Shoreditch Park, N1.

Officers from the Central East Command Unit have asked that anyone with information comes forward to help them with their enquiries.

At approximately 19:30hrs on Thursday, 27 February, a woman in her 20s was walking through Shoreditch Park with her shopping when she was surrounded by four teenage girls she had never seen before. They punched the victim in the face, beat her, and kicked her as she fell to the floor and attempted to steal her belongings.

A passing cyclist spotted the group and shouted at them, and they then fled the scene.

The group ran off down Grange Street before crossing Pitfield Street into a housing estate.

The victim was left with neck and shoulder pain and bruised legs.

Detective Constable Michael Beskine, from Central East Command CID, investigates. He said: “This was an awful, unprovoked attack and has left the victim shaken and angry by what happened.

“I have conducted extensive enquiries but now I am asking the public to come forward and help me. I want to make sure that those responsible are caught and do not inflict this sort of pain on someone else.

“If you know something, please come forward. It was a horrible assault on someone who had never laid eyes on her attackers before.

“Tackling violence continues to be the Met's top priority. We will continue to work tirelessly to identify and pursue offenders, help bring perpetrators to justice, support victims, and keep our communities safe.”

Anyone with information should call police on 101 or contact Crimestoppers anonymously on 0800 555 111.

There have been no arrests and enquiries continue. 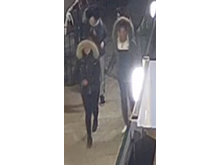