Detectives have released images of two men they would like to speak to in relation to an attempted robbery.

On Tuesday, 13 April at 11:15hrs, police were called to Bloomsbury Square, WC1A to reports that an attempted robbery had taken place and that a man aged in his 30s was sprayed in the face with an unknown substance.

The victim reported that a man unknown to him [Suspect 1] grabbed him from behind and sprayed him in the face whilst he was walking down Bloomsbury Square.

Whilst on the floor, another man [Suspect 2] approached the victim, pretending to be a police officer. They both then attempted to steal his belongings.

The victim was taken to hospital and later discharged. He suffered minor injuries.

The suspects are described as:

- Suspect 2 is a white man with short, black hair and of a stocky build. Wearing a dark blue jacket, blue tracksuit trousers/jeans and black trainers.

Anyone with information is asked to call police via 101 and quote reference CAD 2507/13Apr.

Information can also be provided, anonymously, by calling the independent charity Crimestoppers on 0800 555 111 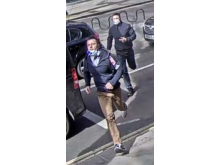 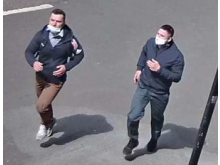